Chawton House Library: the muse for a Jane Austen ‘who dunnit’

Chawton House Library: the muse for a Jane Austen ‘who dunnit’ 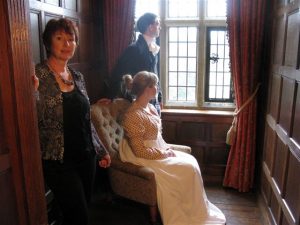 Chawton House Library inspired crime novelist Lindsay Ashford to write The Mysterious Death of Miss Jane Austen, a controversial take on Austen’s death, which has been adapted for Woman’s Hour on BBC Radio 4. Was arsenic poisoning to blame? Lindsay Ashford reveals all.

How did Chawton House Library become the inspiration for your novel?
When I moved to Chawton in 2008 I was a writer of contemporary crime novels and had fully intended to write another one. I didn’t get very far with it because I became entranced by whole atmosphere of Chawton House Library, the history of the place and the lives of Jane Austen and her family. Knowing her brother Edward Austen Knight had owned the house and Austen had been there on many occasions drew me in.

Where did the idea come from for the book?
I met an American lady who was staying in Chawton as part of her prize for winning Chawton House Library’s Jane Austen Short Story Award. She told me that Austen’s lock of hair on display at the nearby museum in the village had tested positive for arsenic after being bought by an American at auction in the 1940s.

I’d already wondered what Austen had died of because when I read her letters, she had written in one several months before she died that: “I am considerably better now and am recovering my looks a little, which have been bad enough, black and white and every wrong colour.”

Having done a lot of research into poisons for my other crime novels, I knew this skin discolouration was one of the symptoms of arsenic poisoning. I had one of those light bulb moments and thought: there’s got to be a novel in this.

Is this a traditional ‘who dunnit’?
Although it’s a murder mystery, it’s also a book about the relationships within Jane Austen’s family and the dark undercurrents, which I picked up on, reading between the lines of family letters. The novel also explores the relationship between Jane Austen and Anne Sharp, a woman who was known to be a very close friend and was also governess to the children of Edward, Jane’s brother who owned Chawton House. It was quite unusual for a servant to become friendly with an employer so I imagined this relationship between the two women and that’s at the heart of the story.

Ultimately, it’s a work of fiction and my take on what I’ve gleaned from family letters, diaries and anything I could get my hands on. At the end of day, it was 200 years ago and no one’s ever going to know the truth. Similarly, with the lock of hair, no one will ever know for sure what – or possibly who – killed Jane Austen.

Perhaps if her remains were disinterred from Winchester Cathedral and modern-day forensic tests were carried out, it may reveal something but you can just imagine the outcry amongst Jane Austen fans.

When your book was published in 2011, it sparked international debate and outcry. Why do you think feathers were ruffled?
The book puts forward a controversial theory, although it’s a work of fiction. What Jane Austen died of remains a mystery but it’s possible that Austen fans feel they own a little bit of her and don’t like it when there’s a suggestion that someone might have wanted to murder her.

She was a very prickly person and didn’t suffer fools gladly so it’s possible that she offended someone enough to make them want to do something like that.

Did knowing there was the Jane Austen connection and family history wrapped up in the house help the creative process?
Chawton House Library is a hugely inspirational place for any writer or scholar, whatever the subject or interest. But when you know that the people that you’re writing about have actually been in the very rooms that you’re in, it adds a whole new dimension. At times I did feel as if Anne Sharp’s voice was whispering in my ear.

When I was writing the scene set in the dining room at the house, I would just walk into the room and imagine these people sitting around the table, the very same table from all that time ago. That’s quite something for a writer.

What is it about the house and library that would appeal to any writer?
It offers everything: beauty, tranquility and history. It’s also authentic in that great trouble has been taken to restore it to its former Elizabethan glory. And there are so many little hide-holes for a writer to go and squirrel themselves away and sit and be undisturbed.

Apparently, Jane Austen often used to sit in a little alcove in what is now called the Oak Room, watching people come up the drive. I don’t know whether she wrote there but she would have likely drawn inspiration from the comings and goings of the house.

The Radio 4 dramatisation of The Mysterious Death of Miss Jane Austen will be broadcast at 10.45am from Mon 24 to Fri 28 February on Woman’s Hour. The novel is available from Chawton House Library, Amazon and other good bookshops.