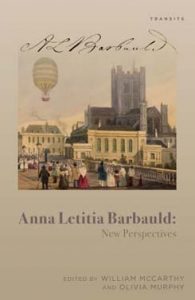 Co-edited by William McCarthy and former Chawton House Library visiting fellow Olivia Murphy, this is the first ever volume of essays devoted to Barbauld.  The collection contains essays by former visiting fellow Michelle Levy and our Patron Isobel Grundy, amongst other specialists of Romantic-Period poetry.

Barbauld, an essayist, literary critic, poet and children’s author, had a successful writing career at a time when female professional writers were rare.  Her versatility and influence are reflected in these new essays which, surveying Barbauld’s writing from early to late, range in discussion from her children’s books to her political writing and her impact on Coleridge and Wordsworth’s generation.