March’s Fun Fact of the Month

March’s Fun Fact of the Month

A message in a bottle 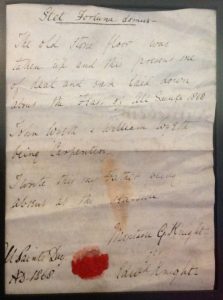 The Great Hall here at Chawton House Library dates from the phase of improvement started by John Knight in 1583; tree-ring analysis reveals that some of the panelling dates from this period and some from the 1620s. A great hall in a building of this age is the descendant of Anglo-Saxon domestic architecture, when it had been a space in which servants, master and mistress ate and bedded down for the night. By the 1500s, gentry families lived in something closer to today’s idea of privacy, and the great hall was instead an impressive room that proclaimed its owner’s status. The wooden floor was laid in 1868 in place of an earlier stone floor.  In 2001, we discovered a message in a bottle, left under the flooring by Montagu Knight, then aged 24. The message is on display in the Great Hall so make sure you read it on your next visit!