April’s Woman Writer of the Month

April’s Woman Writer of the Month 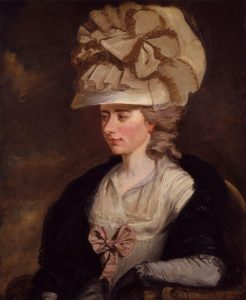 Described as ‘the Mother of English Fiction’ by Virginia Woolf in 1918, Fanny Burney was acclaimed by Anna Letitia Barbauld a hundred years earlier: ‘Scarcely any name, if any, stands higher in the list of novel-writers than that of Miss Burney’.

Burney was a novelist, diarist and playwright and wrote four novels, eight plays, one biography and twenty volumes of journals and letters. She published her first novel, Evelina, anonymously in 1778 when she danced for joy around a mulberry tree but hid her novel from view to save herself the embarrassment of having to own up as its author. When the book’s authorship was revealed, it brought her almost immediate fame due to its unique narrative and comic strengths. She followed it with Cecilia in 1782, Camilla in 1796 and The Wanderer in 1814. Her early novels were read and enjoyed by Jane Austen, whose own title Pride and Prejudice derives from the final pages of Cecilia. William Makepeace Thackeray is reported to have drawn on the first-person account of the Battle of Waterloo, recorded in her diaries, while writing Vanity Fair.

Due to objections from her father, Burney never succeeded in having her plays performed unlike today where a production of Evelina will be performed here at Chawton House Library by The John Kerr Company tomorrow on 2nd April.