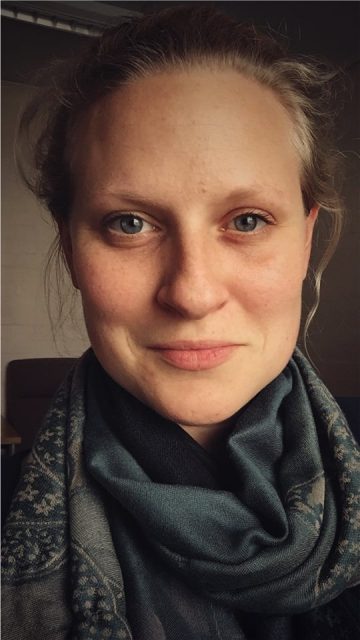 We are delighted to announce the appointment of Dr Kim Simpson to our Postdoctoral Fellowship. This three-year post is shared between Chawton House Library and the English Department at the University of Southampton. Kim will be a member of the Southampton Centre for Eighteenth-Century Studies, splitting her time between Avenue Campus and here. We look forward to welcoming her on the 1st of September.

Firstly, a very warm hello. I am absolutely thrilled to be starting as the Chawton House Library Postdoctoral Fellow in a few short weeks. You’ll be hearing a lot more from me over the next three years, during which my role will include helping to ensure the continuation of an exciting and packed events programme here, and putting together our newsletter, The Female Spectator. But I thought I’d start off by telling you a bit about myself.

Here is the short version of my interests:

Round cats and pointy dogs

And now to expand a little:

I completed my PhD at the University of Kent, in Canterbury, and my thesis was on an early eighteenth-century genre called amatory fiction, which was mostly female-authored, and mostly written before 1740. What I wanted to do was to rethink how we define the genre by reading it through the lens of theories of gender and sexuality. This meant teasing out the correspondences between these short, action-filled, semi-erotic novellas in which naïve young women are cast adrift in brutal dog-eat-dog worlds, and some of our most modern, cutting-edge theories about desire, bodies, and performance.

The places in which I read and wrote my PhD were numerous, and varied: desks of many sizes, trains, planes, stretched out in parks and huddled against kitchen radiators, the tranquil reading rooms of the British Library, and steamy, bustling coffee shops. But one place provided a particular oasis during this time: I was fortunate enough to receive a visiting fellowship at Chawton House Library in Summer, 2012. During my fellowship, I spent time tracing the afterlives of amatory fiction in 1750s women’s writing and beyond, and I remain fascinated by practices of adaptation: appropriations, borrowings, translations, allusions, piracies, sequels and plagiarisms. The month working with items in Chawton’s collection was one of the most productive and lastingly beneficial of my life, and the memory of the beautiful surroundings provided solace in subsequent, less agreeable spaces. It also facilitated some exciting discoveries.

Just as I was discovering new ways of thinking about what it meant to be a woman in my theoretical reading, I was also discovering unattributed texts which bore an amatory stamp. In the archives, Fair Ones, both Distress’d and Unfortunate abound, as do Secret Histories, Fatal Amours, Masquerades, Atalantises, and Nunneries. Amatory anonymity was everywhere, hence my Twitter handle, @AmatoryAnon. You may have heard of Aphra Behn, Delarivier Manley, and Eliza Haywood (if not, you soon shall!). But I was also thinking about the contribution made to the development of fiction by unattributed texts such as The Prude, signed MA.A. (my particular favourite for its libertine villainess, Elisinda), or texts by barely-known writers like Mary Hearne, or Arthur Blackamore. Could these lost writers have more to tell us about the eighteenth-century marketplace, and the way in which authors were influenced by one another? Almost certainly. My current research project, which involves compiling an annotated bibliography and database, was born out of an interest in recovering these anonymous and pseudonymous texts, and in practices of masking and performance more widely.

Chawton House Library is a unique archive, research centre and heritage site, which, in the last 12 years, has played a vital role in shaping academic and public understandings of eighteenth-century literary history. I am sure that playing a part in its future over the next three years will be fascinating and fulfilling, and I’m really looking forward to starting in September.