Home>Posts>Library Blog>Scribbles and Scrapbooks: The Godmersham Park Library
Previous Next

For a research assistant like myself, used to the frenetic buzz of London, Chawton House Library is an ideal countryside retreat. After nearly seven weeks I am still captivated by the beauty of the place. The autumnal colours are at their peak, and softly bleating sheep in the fields beside the magnificent house complete the picture of a researcher’s paradise. Naturally, the rooms inside are just as impressive, with the Lower Reading Room being a particular favourite of mine, holding the Library’s uniquely extensive collection of women’s writing across the centuries. My work at the Library does not, however, concern the splendid tomes held in the Reading Room; instead, I spend my days in a basement store room of little beauty, but enormous interest. 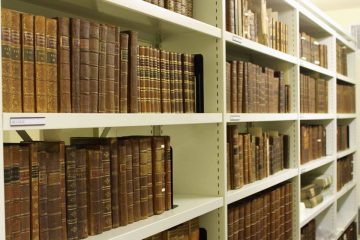 A small selection of The Knight Collection, on deposit at Chawton House Library.

The Knight Collection currently on deposit at Chawton House Library consists of some 2900 volumes. The collection is owned by the current Richard Knight, descendent of Edward Austen Knight (1767–1852) who in 1818 oversaw the creation of two handwritten catalogues (alphabetical and locational) to systematically document the library at his seat in Kent, Godmersham Park. The Godmersham library was moved to Chawton some time between 1853 and 1874, when the estate was sold to a Mr John Cunliffe Kay of Fairfield Hall Yorkshire, for the princely sum of £225,000.1 Almost a third of these works survive in the current Knight Collection, with other volumes in known and unknown locations around the world. 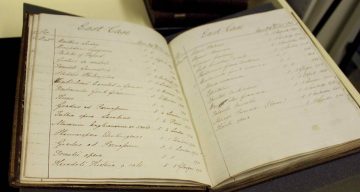 Godmersham Library Catalogue (Godmersham, Kent: 1818), by unknown scribe. Listing books on the fourth and fifth shelves of the fifth column on the east library wall.

My project, initiated by Dr Peter Sabor of McGill University in Montreal with the co-operation of Chawton House Library, is to digitally re-create a snapshot of the library at Godmersham as it would have appeared in 1818. As a result of the ‘locational’ catalogue’s detail—recording works according to their position by case, column, and shelf—we can determine which extant volumes now at Chawton once belonged to the library in Kent. Once finished, this project will consist of a website representing the library as accurately as possible. It will have clickable book spines (for extant books), redirecting users to a page with bibliographic information, high quality photography, and external links to resources at CHL. It will also be searchable and contains reproductions of the title pages of each volume, bibliographical descriptions, and records of family book plates and marginalia. This virtual library enables us to consult each of the titles the collection and to envisage its original position on the shelves, even those volumes which are today absent.

The library at Godmersham held more than 1,250 works, some of them consisting of up to 25 volumes. From religious works and political treatises to novels and poetry, Greek grammar to German painters: the library’s holdings were surprisingly diverse. I am particularly fascinated by the books’ materiality; that is, how printed works exist as objects of beauty as well as knowledge, revealing the history of their ownership through signs of wear and, more interestingly, markings.

Certain volumes, particularly The Peerage and Baronetage, are represented by multiple editions in the collection; all of them are well-thumbed, while some of them bear dozens of lengthy annotations recording births, marriages, and deaths, or recently acquired titles. Other volumes, including Viscemius Knox’s Elegant Extracts…in Poetry (London, 1801) and Prose (1803), bear personal inscriptions on their endpapers.

Some of the most intriguing markings I have found in the books I have examined are the childish scribbles in a particularly beautiful edition of The Bible printed in London, 1585. The large (and exceeding heavy volume) can be seen above, with a pencil indicating the book’s size. This particular tome is not listed in the 1818 catalogue, although seven other editions of bibles are listed, dating from 1638 to 1817. Its absence may indicate its acquisition after the catalogue was completed, or perhaps its presence elsewhere in the house, for example in the drawing room or study.2

This bible was elegantly, and expensively printed, in black and red ink with several illuminated borders and letters. Its thick pages and sturdy spine, now made delicate after over 400 years, would have been produced to withstand frequent use. However, the volume was certainly not designed to endure scrawls and doodles. It appears that an enthusiastic child annotated the title page with marks of his or her own, with what appears to be a modern spelling of “Holy Byble” as “Holy Bible”, an “a”, and an “R”.

A few pages later, under the page listing Saint days, with feasting and fasting, for October, appears to be a letter writing exercise ending in three attempts at the perfect “k”. The scribbles do not appear to be wilfully profane, and are perhaps indicative of a fascination with an elaborate and unfamiliar typeface, with especially such expansive margins in which to draw. Curiously, what may have been the most intriguing page for an intrepid child—an illustration of Adam and Eve surrounded by animals including elephants, rhinoceroses, lions and unicorns—has been left unmarked.

In an amusing and perhaps ironic twist, illegible scribbles decorate the margins of a passage in Genesis 6:5, “The LORD saw that the wickedness of man was great…”. Whether or indiscriminate scribble or an irreverent joke, a spurt of ‘naughtiness’ might better describe the looping scrawl rather than ‘wickedness’. Perhaps at some time in the book’s long existence it was realised (too late) that a holy text was being used for handwriting practise, or perhaps the various copies of the bible in the Godmersham library meant that this edition was too little used to warrant proper protection; in either case, its markings indicate that it was used by at least one dauntless doodler.

Another item displays a very different mode of alteration: this time in the form of a ready-made scrapbook. This copy of The Illustrated London News dates from February 1901, many years after the 1818 Godmersham Catalogue was made. Yet although it is beyond the scope of my project I couldn’t resist sharing the discovery. With the death of Queen Victoria on 22 January, the nation was engrossed by funeral commemorations for the late monarch, as well as preparations for the coronation of King Edward VII. On first glace this volume appears to be merely a collection of several editions of Illustrated London News: its orthodox exterior belies a far more curious interior.

On a page filled with advertisements and unrelated article is pasted an envelope holding a copy of the Illustrated Programme of the Royal Jubilee Procession (London: The Prince of Wales’s Hospital Fund for London, 1897). Inside this illustrated booklet is a letter commenting how “the People love the Queen”, reminiscing on the events celebrating the Queen’s coronation, and praising her as a great ruler and “Mistress of the Empire”. A stamp at the bottom, right-hand corner of the page shows its receipt at Chawton. Two pages have been removed in order to comfortably fit the sheaves of paper within the book.

It seems that a pervasive sense of nostalgia pervades each object in very different ways. Obsession with deaths and births in the British monarchy has continued from the Victorian age to the present, with commemorative photographs and magazine spreads occupying the interests of millions of readers.

The 1585 edition of the Bible shows marks of a childish hand, eagerly but naughtily scrawling on a holy text. Although it is impossible for me, not being an expert, to determine the date of ink scribbles, they appear to be written with a quill. If so, it seems a universal truth that children love scribble where they ought not; but from a researcher’s point of view, markings of any kind are signs of a much-loved library.

Jennifer is a Canadian research assistant working at Chawton House Library on the research project, Digital Godmersham, funded by Dr Peter Sabor at McGill University, Montreal. She completed her undergraduate studies in History of Art at McGill and is pursuing her Master’s degree in the same subject at the Courtauld Institute in London.

1  Many thanks to September intern, Kate Shaw, for her work in discovering this information in The Weekly Supplement to the Sheffield Daily Telegraph, 1 August 1874 (p. 2).

2  This early edition of the Holy Bible bears the bookplate of Montagu George Knight (1844–1914). However, as Dr Sabor has pointed out, he frequently affixed his bookplate to volumes already present in the library collection. The bookplate’s presence, unfortunately, cannot give any indication of the date of acquisition.