To celebrate Mother’s Day, we’ve taken a look at some of the early nineteenth-century parenting books on our shelves.

While mothers two centuries ago might have lacked such useful tools as baby monitors and tearless shampoo, not to mention antibiotics, they did have one useful tool: parenting advice books. This Mother’s Day, we have perused these guide books in the hope that their nineteenth-century advice may prove useful (or at least amusing!). 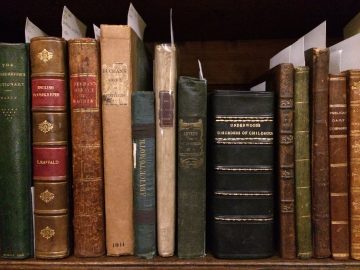 A shelf in our lower reading room shows a collection of parental advice books, including Buchan’s and Mountcashell’s.

Some advice in taking care of babies seems to be as universal as one might hope. In his 1803 book Advice to Mothers, William Buchan, M.D. informs those ladies who may not have considered the dangers of knives. ‘Knives and sharp instruments, with which [children] may cut or wound themselves,’ he explains, ‘are very improper playthings.’ But beyond such logical statements, advice can be a bit more varied.

As in today’s parenting guides, advice on the same subject can often conflict. In her 1835 book, A Grandmother’s Advice to Young Mothers, Countess Dowager Mountcashell advises great care and consideration with infants’ clothing. ‘No alteration in an infant’s clothing should be made when it is sleepy,’ she says, ‘that its temper may not be irritated by delays when it is impatient for repose.’ Buchan, however, takes a more surprising tack. He advises mothers to take note of ‘the conduct of those nations that approach nearest to a state of nature.’ These, he explains, do not use, ‘rollers or bandages to strengthen the imaginary weakness. They […] carry them abroad in the open air [and] wash their bodies daily in cold water.’ This must have confused the nineteenth-century mother no end, as Buchan himself recommends against cold baths in an earlier chapter of the same book.

Parenting books today contain many an instructive example. But modern tales pale in comparison to Buchan’s cautionary tale of Neddy, a spoilt child. Poor Neddy, a promising boy in his youth, has experienced no kind of danger or exertion until eighteen years old. At that point, ‘to judge by his look, one would have supposed him to be at least eighty. […] His eyes [are] sunk in their sockets–his teeth quite decayed–[…] his legs like spindles,’ and more. By this time his father has realised his mistake, but it is too late. Poor Neddy soon meets an early demise. 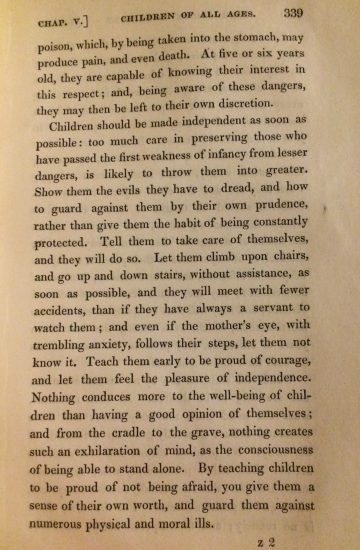 As extravagant as some parts of Buchan’s advice book are, his slightly later contemporary Mountcashell’s work contains advice strikingly similar to what one might see today. When faced with an overly sedentary teenager, Mountcashell advises a mother not to try to attack the symptoms directly. Giving the child meaningless tasks will ‘serve only to increase the indisposition.’ Instead, ‘amusing occupations should be found which might break through the inclination to sit still.’ The idea of targeting the causes of the misbehaviour, rather than the misbehaviour itself, appears in many a modern book.

Mountcashell offers a similarly progressive insight into building self-sufficiency in children. Where Buchan employs his extravagant parable, Mountcashell takes a more reflective approach. She advises parents not to constantly shelter their children, but to ‘show them the evils they have to dread, and how to guard against them by their own prudence, rather than give them the habit of being constantly protected. […] Even if the mother’s eye, with trembling anxiety, follows their steps, let them not know it. […] By teaching children to be proud of not being afraid,’ she concludes, ‘you give them a sense of their own worth, and guard them against numerous physical and moral ills.’

This difference may perhaps spring from the 32 years of progress between the two books. It may rise from the fact that Mountcashell’s advice was from the perspective of a grandmother, rather than a male physician who is unlikely to have direct child-rearing experience himself. But whatever the advice of these nineteenth-century authors, we hope that present-day mothers will take heart from the knowledge that their trials are by no means new ones. Happy Mothering Sunday from all of us here at Chawton House Library!