Home>Posts>Woman Writer of the Month>Woman writer of the month: Eliza Haywood
Previous Next

As part of our #WomensWrites campaign in 2017, we will be featuring a different woman writer on our website each month. This is one of many ways we will be spreading the word about early women’s writing.

‘With this experience, added to a genius tolerably extensive, and an education more liberal than is ordinarily allowed to persons of my sex, I flatter myself that it might be in my power to be in some measure both useful and entertaining to the public.’
Eliza Haywood, The Female Spectator

Eliza Haywood is our first woman writer of the month. Although popular in her own lifetime, like many of the writers in our collection, she has since disappeared from mainstream publishing and popular culture. 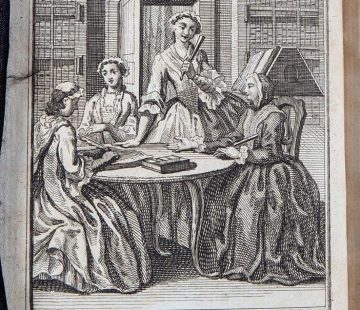 We have little information on Haywood’s personal life. The lack of such records is in direct contrast to her writing, which was prolific and varied. She produced novels, plays, poetry, periodicals, conduct books, and translations.

Her earlier work participated in a genre now known as amatory fiction. These narratives were concerned with love and seduction. One of Haywood’s best-known novels is her first, Love in Excess (1719-20). This was a successful debut, which went through six editions.

In the 1740s, Eliza Haywood produced The Female Spectator, a periodical (and a response to The Spectator). It featured romantic and satirical stories, moral essays, and social and political commentary. Letters supposedly written by readers to the four ‘editors’ of The Female Spectator covered everything from the craze for tea drinking to the problem of gambling, from politics, war and diplomacy to the importance of science and natural history. It was, according to Patrick Spedding’s bibliography, Haywood’s most popular work. Chawton House Library named its own newsletter The Female Spectator in homage to the original.

In 1751, Haywood published The History of Miss Betsy Thoughtless, another of her better known works, and one of her most popular ones in her own time. This novel reworks some of the concerns of her earlier fiction into a style better suited to the changed tastes of the 1750s literary marketplace. It portrays a difficult first marriage between the thoughtless heroine Betsy, and her abusive husband. This makes it a forerunner of later novels that show difficulties within marriage, such as Mary Wollstonecraft’s Maria, or the Wrongs of Woman (1798), or even Anne Brontë’s The Tenant of Wildfell Hall (1848). In it’s concern with the coming of age of its young heroine, Betsy Thoughtless can also be likened to other 1750s novels such as Charlotte Lennox’s The Female Quixote (1752), or later novels like Frances Burney’s Evelina (1778).

A new exhibition on Eliza Haywood’s work, Naming Shaming, Reclaiming: The ‘incomparable’ Eliza Haywood, opens at Chawton House Library on 20 March 2017. Entrance to the exhibition is included in the price of admission.