The historical novelist, Edward Rutherfurd, whose best-selling works include Sarum, London, The Forest and New York, has made a generous $10,000 pledge towards our campaign to save #JanesGreatHouse. 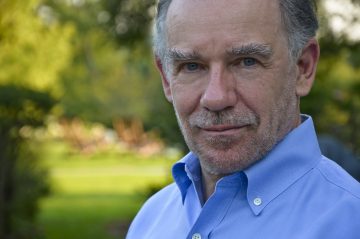 ‘As a Life Friend of Chawton House Library, I brought my children — following in Jane Austen’s footsteps — to the “Great House”. They had both read Pride and Prejudice, at least, and seen the movie.  Now they found themselves inside Jane Austen’s own world, not only spiritually, but physically. They could look at pictures she would have known, sit round the table she dined at. They were especially fascinated by the big kitchen.  But when they were shown the huge literature written by other women of Jane Austen’s period, my daughter also caught on to something else. “These were the ground-breaking women of their day,” she said. “Within the limitations of the time, they were having inspiring careers.” She was right.  Several of them even left us timeless classics.

And in the village — amazingly little changed since the early nineteenth century — and the homes where Jane Austen and her family actually lived, the huge legacy of these writers is being rediscovered, and their world recreated. There is nothing else like Chawton House. It’s a living and a growing treasure, a magical place that must be preserved for future generations—and enhanced into a world heritage destination. This is why I am proud to be helping this campaign with a 10,000 dollar pledge for 2017. Do join me in donating any amount — large or small — so that the team on the ground can put their plans into action.’

Thank you so much Edward! You can join Edward and donate to the campaign here.