Christina Boyd, editor of YULETIDE, created and collated a Christmas Anthology with all the proceeds going to Chawton House. Below we discover the story behind the work…

Where did the inspiration for YULETIDE come from?

After wrapping up a six week blog tour for my anthology “Rational Creatures” (pub. October 2018), a collection of stories written by sixteen strong women about some of Austen’s strongest female characters, I had been reflecting much on the research library at Chawton House, the Centre for the Study of Early Women’s Writing. In the spring of 2017, I had the good fortune to visit Chawton House, as well as the Cottage, along with author Joana Starnes, blogger Mira Magdo, and my dear Mr B. That magical day left a lasting impression on me because of the history, connection to Jane Austen, and the present day library and research center.

Never one to idle long—I was waiting on a manuscript from another author to do a full edit—and wondered if it was possible to publish a holiday anthology by December. In an inspired moment, I thought “How about a Christmas-themed anthology and give all the proceeds to Chawton House…?” Easy as that, I asked all my twenty-two anthology authors and explained we would have less than a month to make it to holiday market and was anyone interested? Further, unlike previous anthologies, I could not pay them for their stories, asking them to donate their work to this project so that I might donate all the royalties (sans taxes) to Chawton House. Caitlin Williams, Joana Starnes, Amy D’Orazio, Lona Manning, Anngela Schroeder, J. Marie Croft, and Elizabeth Adams took up the challenge!

What made you want to direct the proceeds towards Chawton House?

My life is more colorful because of Austenesque authors, like-minded readers, and through the many connections and friendships I have made through Jane Austen. Last year I bought several bricks for the Buy-a-Brick program for Chawton House as gifts, and this project seemed the next likely step for me to be able to give back.

Were there any objects or spaces in particular you were drawn to when you last visited Chawton House?

When I think of Chawton House, I have flashes of moments:

the iconic long driveway as we made our way to the house; the gates into the Walled Garden; the disguised drink cabinet in the library bookcase; the window nook overlooking the driveway from the first floor; and the heraldic stained glass windows in the Great Gallery. 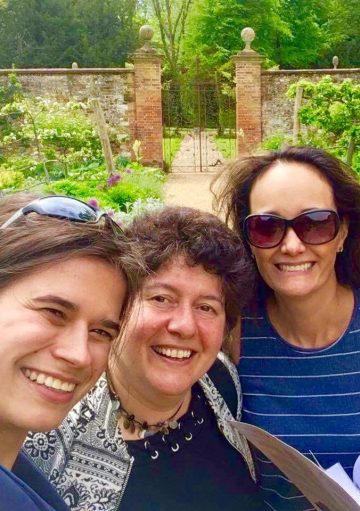 Having decided you were going to create a Christmas anthology, you had less than a month to produce it. What was the most challenging?

Time. I gave the authors TWO weeks to send me a manuscript to edit. I have never been so thankful for email. This project would never had happened on time, nay!—ahead of time—had I been dependent on the post. Imagine my entire edit process: I edit a story, return it to the author, back and forth until we get it right, then to my proofer, Debbie Brown, who corrects all I missed (and she donated her time as well), then back to the author to approve or reject, and again back to me. All of that repeated and juggled for all the stories. That’s the abbreviated, less chaotic version, but I think you can imagine how email made our impossible deadline realistic, considering the “team” lives in the UK, Canada, and all over the US. (All of that happens on every project but not in this hectic, abbreviated schedule!)

The biggest stressor was worrying about formatting it myself as I had never done that before, always hiring out. And lo! author Karen M Cox offered to format the ebook and the paperback. Over the American Thanksgiving holiday weekend, she formatted the anthology. I can’t tell you how much of a relief that step was to me. I think I would still be formatting it had it been left to my learning curve. Thanksgiving indeed!

Can you tell us about the book’s cover design?

As content and copy editor, I knew I could also keep costs down if I designed a cover myself. So, the cover you see is my own work too. The public domain image is Victorian era but I think it lends to the spirit of the season and the multi-era stories within. The black and white photo on the back cover is of Joana, Mira, and me as we walked up to the house in 2017. 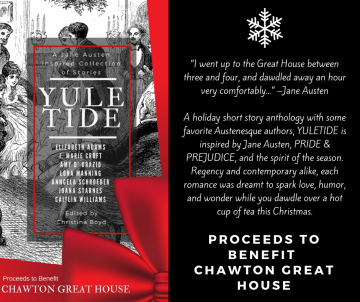 What was the most enjoyable aspect of the process?

I felt great satisfaction when the finished product went live on Amazon and seeing on social media the enthusiasm of the seven contributing authors and the support by bloggers, reviewers, and readers.

If you could travel back in time and ask Jane Austen one question, what would it be?

“Were you ever in love?”

And finally, do you have a favourite story in the anthology?

As we can’t force you to choose, which is your favourite Austen novel?

My favorite story is always the novel or movie adaptation that I last read or watched.