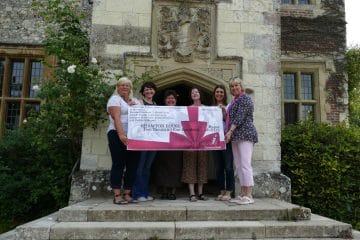 Last Wednesday, four of the seven authors of Yuletide, a Jane Austen inspired Christmas anthology, presented Chawton House with a cheque for $2400, the first royalties made from book sales.

The Christmas anthology was created and collated in just one month, with the editor, Christina Boyd, deciding to give all the proceeds to Chawton House. Haste was required in order to meet 2018’s holiday market, before the New Year began. Authors were given two weeks to create a manuscript for editing, before sending it on for proofing and formatting.

Two of the authors came from America to present the cheque, with Californian Anngela Schroeder saying of the experience: “Having never been to Chawton before, I was overcome with a reverence for Jane and her family that I felt walking through Chawton House. It was a home… a living, breathing home where children had played, dreams had been shared, people had lived and died. I feel blessed to have had a chance to see a home which is so lovingly cared for by the stewards of Chawton House. Jane and her family would certainly have approved.”

Of money matters, Jane Austen famously wrote “People are more ready to borrow & praise, than to buy–which I cannot wonder at;–but tho’ I like praise as well as anybody, I like what Edward calls Pewter too.” It seems Jane Austen would indeed have approved of the intentions behind Yuletide’s creation, given the ‘Pewter’ raised will be donated to her brother Edward’s house.