‘marriage is wise and ought to be a sacred institution; and I bitterly regret the hour when, with the hasty and immature judgment of eighteen, and with a degree of presumption scarcely pardonable at any time of life, I dared to think and act contrary to this opinion and the reverend experience of ages, and became in the eyes of the world an example of vice, when I believed myself the champion of virtue.’ 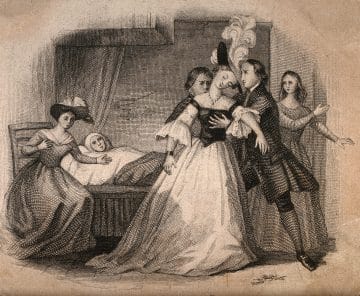 A fashionable young woman fainting into the arms of a young man at the bedside of an invalid. Engraving. Wellcome-Collection

Steeped in the sentimental conventions of the day, with a deeply sensitive, self-sacrificing heroine who screams, sobs, and suffers in emotional agony, who faints more than five times in 268 pages, and, too pure for this world, eventually expires after an emotional deathbed reunion with her estranged mother, Adeline Mowbray is very much ‘of its time.’ The Critical Review noted that although Opie overused the expression ‘gulping down sobs and sighs’ (this reader agrees!), the novel nevertheless did not fail ‘to affect her readers with many heart-rending scenes’: a desperate young woman forced from her home by the lecherous attentions of her step-father; a dying lover’s desire for an expensive pineapple reluctantly ignored so as to rescue an indebted stranger torn from his wife and child; an illegitimate child tearfully explaining his exclusion from playtime with the other boys – this is a novel designed to move readers between indignation, sympathy, and admiration, to encourage readerly participation in its moral dilemmas, and to teach appropriate behaviour by examples, both positive and negative.

Despite its strict adherence to a sentimental mode that now tends to produce laughter rather than sympathetic tears in readers, the novel’s concerns with parental responsibility, impressionable youth, reading and education make it relevant in an age prone to moral panic about these issues. Whether it be parents contacting schools demanding that reading material be removed from the syllabus, newspapers worrying about the effect that university is having on ‘snowflake’ students, or researchers declaiming that online dating is destroying the fabric of family life, anxiety over the effect of radical ideas and technologies on the young and impressionable is nothing new.

When William Godwin’s Enquiry Concerning Political Justice and its Influence on Morals and Happiness was published in 1793, its condemnation of the ‘evil of marriage’ as an ‘affair of property’, an unnecessary institution that restrained the natural progress of mankind, provoked outrage.[1] It also, at least in his immediate circle, sparked an intellectual discussion that Opie’s novel is participating in by considering the effects that his ideas might have on impressionable readers. As Opie scholar Roxanne Eberle points out, ‘[a]s an enthusiastic member of the circle surrounding William Godwin, Holcroft, and Elizabeth Inchbald, and later Mary Wollstonecraft, Alderson [later Opie] participated in “Jacobin” politics and philosophy’ throughout the 1790s.[2] But her participation was critical and thoughtful. Unlike Godwin, who believed in the fundamental goodness and rationality of humankind, Opie is alert to the ways in which a cruel and irrational world can make living by one’s ideals impractical, especially for women. 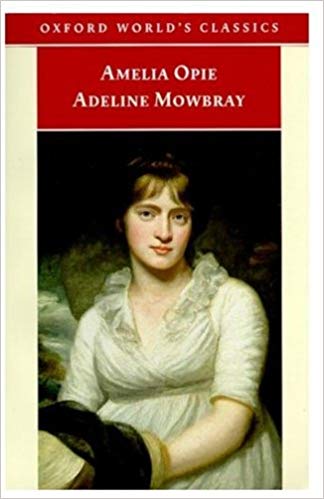 Published in three volumes in January 1805, Adeline Mowbray’s initial print run of 2000 sold steadily, and it was in a third edition by 1810, as well as appearing in circulating and subscription libraries. It was also being read in France (1806 translation by C. Chenel) and America (an edition was published in Georgetown, Washington in 1808). The novel, as the subtitle tells us, tells the story of a mother and daughter. Editha Mowbray is a woman of genius – extremely well-read, a great conversationalist, but not particularly practical. Distracted from the education of her daughter Adeline by an attempt to write a book about said education, Editha fails in her maternal responsibility to provide Adeline with the attention and breadth of study required to understand fully the world she must exist in. We hear that:

‘Mrs Mowbray’s peculiar taste had led her […] to the perusal of nothing but political tracts, systems of philosophy, and Scuderi’s and other romances. Scarcely had the works of our best poets found their way to her library; and novels, plays, and works of a lighter kind she was never in the habit of reading herself, and consequently had not put in the hands of her daughter.’

Adeline is thus taught theory, but has nothing to exemplify how these theories might work in practice. At a time when there was much anxiety over the pernicious effects of ‘works of a lighter kind’, Opie suggests their didactic importance. Whereas in other novels, such as Charlotte Lennox’s The Female Quixote (1752), lack of guidance in reading often results in an overreliance on romances, or on a susceptibility to the corrupting effects of pornographic works provided by predatory libertines (see Eliza Haywood’s 1720s fiction), Adeline’s poison is the theories of Glenmurray against marriage.[3]

Like Glenmurray, Godwin was willing to sacrifice his own principles to preserve the reputation of the woman he loved. He married the pregnant Wollstonecraft on 29th March, 1797. His 1798 memoirs of Wollstonecraft, who died from childbirth-related complications just five months after their marriage, unfortunately went on to have the same effect that their marriage was supposed to prevent. His candid accounts of her affair and illegitimate child with Gilbert Imlay and her suicide attempts ensured that her name was connected with loose morals for the next century or so. Surely it is with this rebuff to Godwin’s naive faith in the understanding of his readers in mind that Opie penned Glenmurray’s character, and explored the effects of his theory on her female heroine’s reputation.[4] 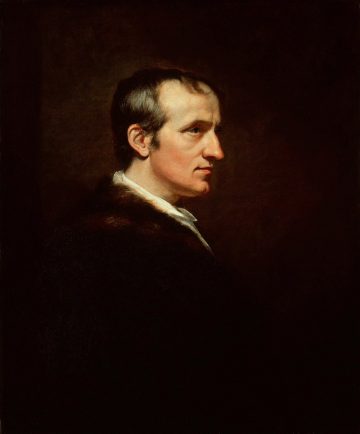 Whilst her mother can admire Glenmurray’s sentiment but see how it would not work in practice, Adeline imbibes the theory in a fanatical way, and when she meets Glenmurray in person becomes his mistress, refusing his marriage proposals on the grounds that marriage would threaten his integrity. What befalls her after this is a catalogue of disasters: she flees the attentions of her mother’s libertine husband; her mother renounces her, ostensibly because of her affair with Glenmurray but actually out of jealousy and rivalry; she miscarries her child; Glenmurray dies of consumption but only after coercing her to marry his cousin, Berrendale; Berrendale turns out to be a gluttonous bully who starves her, has an affair with their maid, and then runs off to Jamaica to engage in a bigamous marriage with an heiress, leaving her alone with a small daughter; she is insulted and assaulted by a variety of men; and finally, she dies, penitent for her past opinions, after reuniting with her mother. The men in this novel are, at best, naïve and ineffectual, at worse, predatory and tyrannical. The glimpses of hope in the narrative are provided by the female friends she encounters: a ‘mulatto’ known as Savannah; a Quaker, Sarah Pemberton; and the sensible wife and sister of one of Glenmurray’s acquaintances. This slim novel is packed full of incident, so much so that Dorothy Wordsworth wrote to her brother William in 23 April 1812 that ‘Adeline Mowbray made us quite sick before we got to the end of it.’

On 9 September, the Chawton House reading group met to discuss the novel. The lively discussion included attention to some of the inadvertently comic moments: Editha Mowbray seeing off a marauding cow with an umbrella; Berrendale fantasizing about Adeline nursing him, ‘leaning tenderly over his gouty counch’ (yuck!); the accusation that Editha ‘married a pennyless [sic] profligate, merely because he had a fine person and a handsome leg’. Also up for discussion were topics including dueling, false marriages and bigamy, the colonial backdrop of the novel, the treatment of black characters (sympathic for its time, but problematically stereotypical today), alignments between Glenmurray and Godwin and several of the female characters and Wollstonecraft, the positive portrayal of Quakers, and intercepted letters as somewhat clumsy plot devices. Connections were made between Adeline’s renunciation of her earlier views, and the ‘extraordinary fate’ of Marianne Dashwood in Austen’s first novel, ‘born to discover the falsehood of her own opinions, and to counteract, by her conduct, her most favourite maxims.’ The majority of the conversation was given over to a consideration of Adeline’s untimely death though – was she punished for her transgression as we might expect from a Victorian novel? Initial reviewers certainly thought so, but a closer examination shows that whilst Opie outwardly condemns Godwin’s ideas about marriage, her actual depictions of marriage are far from enthusiastic. In fact, the Berrendale marriage bears some similarities with Mary Wollstonecraft’s depiction of an abusive marriage in Maria: or, The Wrongs of Woman (1798). Moreover, despite living in sin, Adeline remains a staunchly moral, virtuous character throughout, one who is literally killed by her own integrity. 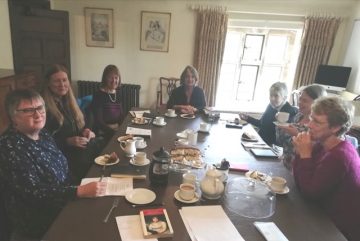 Adeline Mowbray has provided a fascinating insight into the intellectual life of the woman whose letters are now date-ordered and safe in preservation sleeves, ready to be pored over. I wonder whether I will see glimpses of this Opie in letters written over two decades later, or whether, like her heroine, like Godwin, she will go back on her earlier self. Shelley King thinks about Adeline Mowbray in terms of a clash between worlds that should be and worlds that are, and this deeply philosophical question at the heart of the novel – how do we live by our ideals in a world that doesn’t allow us space to do so? – has never been more pressing than it is now.

If you are interested in joining the Chawton House reading group, we next meet on Monday 21st October to discuss Mary Wollstonecraft’s Original Stories from Real Life (1788).

[1] A review of Godwin’s 1803 biography of Chaucer in the Anti-Jacobin Review (July, 1804) criticized Political Justice as having ‘so depraved an attachment to paradox, so romantic a turn for extravagant reverie, and a spirit of such determined hostility to all the most salutary existing institutions of civil society, that the author was very generally, and not without reason, regarded not only as a wild and visionary, but as a highly dangerous and mischievous writer.’

[3] For more information about the ways in which women in the long eighteenth century were thinking about women’s rights and education, see the current display in the Lower Reading Room at Chawton House: Writing Women’s Rights.

[4] Some of the letters between Godwin and Alderson from 1795-97 remain in the Abinger Collection at the Bodleian Library, Oxford, and have been digitized. You can read her letter to him from 11th October 1797, on learning of the death of his wife, Mary Wollstonecraft, here: Page 1 ; Page 2 ; Page 3