Chawton House’s magazine, The Female Spectator, is relaunching with a special lockdown issue, to be published online in June. 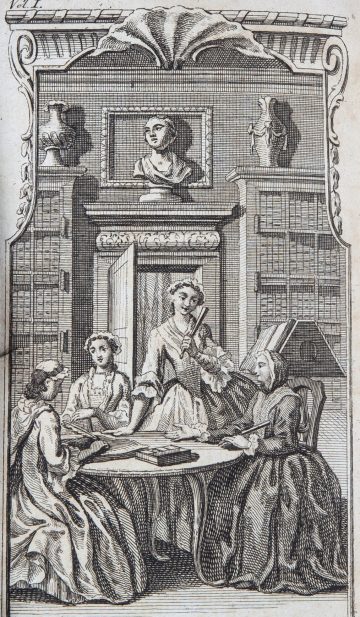 Originally set up in 1995, Chawton House’s magazine is a tribute to Eliza Haywood’s Female Spectator, which was published monthly from 1744-46. The main voice of Haywood’s magazine – the female spectator – is a reformed woman. Having spent her youth engaged in ‘a hurry of promiscuous diversions’, she is now older, wiser, and ready to share ‘useful and entertaining’ insights with the public. As women’s writing scholar Isobel Grundy noted in her introduction to Chawton’s first ever issue, Haywood’s Female Spectator ‘aimed to increase the range of women’s interest in books, human society, and the natural world.’ The content included letters which purported to be from male and female readers interspersed with editorial commentary by several narrative voices. Topics were as diverse as herbs, the planets, responses to contemporary poetry, and stories of forced marriage or parental tyranny.

Our new Female Spectator will continue our tradition of sharing both news from Chawton House itself and the fascinating and varied work done by researchers and scholars on the collections, and particularly on women writers in the long eighteenth century. In addition, we want to hear from and include your voices in our pages. The current public health crisis has dramatically changed the way that we are living, but it has been heartening to see the ways in which people have used this time to innovate, to explore their creativity, and to develop their hobbies or research. Magazines in the eighteenth century were spaces in which amateur writers and professionals mingled, reviewing the latest novels or fashions, writing poetry or short stories, sharing riddles or recipes, and it is this spirit that we want to reflect in our next issue.

This will be a paid-for publication. If you make a contribution of £25 or more to our Emergency Appeal, are a member of the North American Friends of Chawton House, a Friend of Chawton House, or one of our volunteers, then you will receive exclusive access to The Female Spectator when it is released online in June. It will also be available via our new online shop.

Are you working on an aspect of women’s lives or writing in the long eighteenth century that you’d like to share? Do you have a short piece that needs a home? If so, we want to hear from you!

Topics must have some relation to Chawton House’s collections or story, but may include:

You can see some examples of previous issues by clicking here.

Please send queries, or submissions of 400-800 words to kim.simpson@chawtonhouse.org by midday on 14 May.