On this day in 1817, Jane Austen died. To commemorate her life, we are sharing the title article from our latest issue of The Female Spectator, written by Curator and Collections Manager Emma Yandle, about one of our recent Austen-related acquisitions. We are working on a full annotated transcription currently, which we plan to share in August. 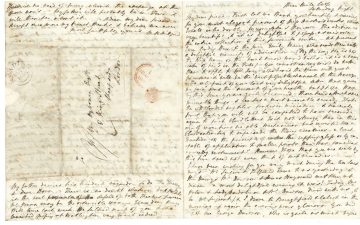 Chawton House has acquired a previously unknown letter by Hampshire author Mary Russell Mitford, in which she thanks the recipient for a recent gift of ‘the entire collection’ of Jane Austen’s novels. The letter, acquired with the generous help of GLOSS, joins our 1782 Knight-family edition of William Cowper’s Poems, which came home to Chawton House in January 2021, as one of our most exciting Austen-related acquisitions of recent years. Originally held in the Godmersham Park library, the Cowper copy was likely consulted by Austen herself during visits to her brother, Edward Knight, at Godmersham. Mitford’s letter refers to another work that was also in the Knight family library, although after Austen’s death—the 1833 Bentley edition of Austen’s collected works. The Bentley set once owned by the Knight family was returned to Chawton in 2017 by Sandra Clark, and can now be displayed alongside this handwritten reference to the edition in Mitford’s letter.

Mary Russell Mitford (1787-1855) was a prolific letter writer, with an estimated 2,000 autographed letters currently held in public collections. Like her hugely popular Our Village stories (1824-32)—sketches based on her life at Three Mile Cross, a village close to Reading in Berkshire—her letters are chatty, wide-ranging affairs. They move seamlessly from the health of family members, to social calls paid and planned. Updates on the progress of her work intermingle with financial concerns, and her views on literature and philosophical writings. The personal nature of Mitford’s correspondence shines through regardless of her subject, allowing us to build a strong sense of the close relationships she sustained throughout her life. 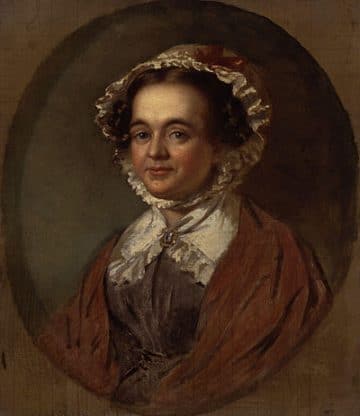 Despite both the quantity of extant manuscripts and the breadth of their topics, a scholarly edition of Mary Russell Mitford’s collected letters does not yet exist. This is a central aim of the ongoing Digital Mitford project, online since 2013, which combines comprehensive location lists for her manuscript material with images and glossed transcriptions. In print, one must still turn to The Letters of Mary Russell Mitford, edited by Henry Chorley in 1872 and introduced by R. Brimley Johnson in 1925, alongside volumes dedicated to individual correspondents, such as Elizabeth Barrett Browning. For the contemporary scholar, Digital Mitford is an invaluable resource for parsing Mitford’s social circles, with names and recipients appearing again and again. Yet more letters keep appearing1, and last month, thanks to the generosity of our supporter circle, Chawton House was able to acquire a previously unknown letter which gives new insight into Mitford’s opinion and appreciation of her better-known peer, Jane Austen.

Comparisons have long been made between Jane Austen and Mary Russell Mitford, born 10 years apart and 15 miles apart. The Hampshire writers never met but their social circles crossed over throughout their lives. As Azar Hussain pointed out in a piece on the two writers for Persuasions, James Edward Austen-Leigh’s A Memoir of Jane Austen and Rev. A. G. L’Estrange’s The Life of Mary Russell Mitford were both published in late 1869 (1870 on both title pages), although Mitford had died in 1855 and Austen in 1817.2

Hussain  records  eighteen  letters  in  which  Mitford mentions  Austen  or  her  novels,  to  which  we  can  now add  a  nineteenth.  They  show  that  she was well aware of the geographical and social connections between them. In a somewhat gleeful, and now infamous letter to her great friend Sir William Elford on 3 April 1815, she writes

Apropos to novels, I have discovered that our great favourite, Miss Austen, is my countrywoman; that mamma knew all her family very intimately; and that she herself is an old maid (I beg her pardon—I mean a young lady).

It is for two distinct descriptions of Austen in this letter that Mary Russell Mitford is invariably today best-known by Austen readers: the first, a memory of her mother’s of Austen as ‘the prettiest, silliest, most affected, husband-hunting butterfly she ever remembers’, although aged about ten at the time; the second was heard from a friend who had recently visited Austen, and described her as ‘the most perpendicular, precise, taciturn piece of “single blessedness” that ever existed’. Long used as evidence for Mitford’s disdain for Austen, recent assessments such as Hussain’s have placed the letter’s comments within the wider context of her discussions of Austen, that invariably demonstrate her great and increasing admiration for her writing  and detailed knowledge of her plots (of time spent in Lyme Regis she describes the Cob as “to which Miss Austen has given such an interest”).3 Our new acquisition provides fascinating further evidence of Mitford’s high opinion of Austen’s writing and undermines the pervasive sense of competitive criticism in joint accounts of the writers.

The letter can be confidently dated to 1833, from the just decipherable postmark. It can most likely to narrowed down to October, due to a reference to a poem by John Kenyon that Mitford is believed to have received at this time. Here she writes: ‘I have just received a very fine Poem called a “Rhymed Plea for Tolerance” a most striking work’, which precipitated correspondence and a warm friendship with both Kenyon and his wife. The year bears further relevance when considered in light of its opening lines:

My dear friend—First let me thank you heartily & sincerely for your most elegant present of Miss Austen’s works, which I shall value doubly— for your sake & their own. The edition is very beautiful, & it is delightful to possess as one’s own the entire collection of this favourite writer—at present I am lending them to the fair Emily [Weiss?] who reads them with a delightful sincerity of admiration.

Austen, ‘our great favourite’ in her letter of 1815, remains so eighteen years later, but with an even wider remit, as ‘this favourite writer’, an indication of both Mitford’s and the wider reading public’s opinion.4 1833 was a significant year in Austen publication history. Publisher Richard Bentley, having acquired the copyright to all Austen’s completed novels from the executors of Thomas Egerton and Henry and Cassandra Austen, re-issued Austen’s collected works as part of his ‘Standard Novels’ series. Running into many editions, the effect on Austen’s popularity throughout the Victorian era and her placement firmly within the literary canon during that time period has been well-established. It is clear then that ‘the entire collection’ and ‘very beautiful’ edition that Mitford writes of are the Bentley editions, newly made available. 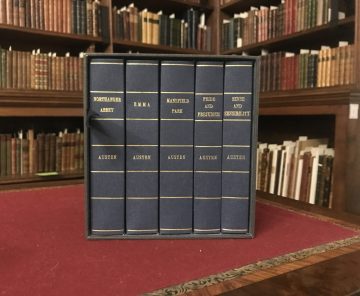 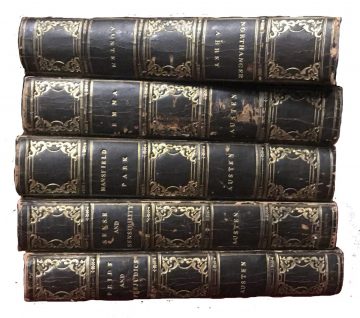 That a close friend—an impression clearly given by the tone and content of the letter—has gifted Mitford Austen’s works so soon after the edition reached the market, is compelling evidence of the personal connection Mitford felt for Austen. From her remarks on the beauty and elegance of the new set—complete for the first time with an illustrated frontispieces—coupled with clear evidence that she had read and knew the novels well, one could reasonably conclude that she was already in possession of Austen’s novels.5 From such an angle the gift offers insight into Mitford not only as a reader, but as a book-owner, and suggests that the presentation of Bentley’s editions of Austen were in many respects as important as the sheer increase in copies of the novels that they generated. Mitford herself writes that she has already loaned the set out to one who appears to be receiving her first introduction to Austen, by Mitford’s rendering of her ‘delightful sincerity of admiration.’

Who, then, is the recipient, who knew Mitford well enough to buy her the new edition of Austen’s works? Addressed only to “My dear friend”, the envelope records the recipient as W.W. Ogbourn Esq. of 8 King Street, Cheapside.6 It is not the only extant letter addressed to Ogbourn; another from 1826, held by Lambeth Palace Library, was later published in Lippincott’s Magazine in 1894.  Ogbourn appears to have worked for a literary magazine or acted as a publishing go-between. In this letter, Mitford requests that he return articles she sent him for a Mr. Ebers’ planned book, ‘as I am much pressed for contributions by Mr. Bayliss and Mr. Blackwood and these papers might and I think would suit one or other magazine.’7 In this letter she references his cousins in Wokingham, most probably the ‘Miss Ogbourn’ who frequently appears in her notebook of 1819-1823.8 Initial research suggests that he is related to the Webb sisters, who frequently appear in Mitford’s correspondence—the daughters of James Webb Esq. and Jane Elizabeth Ogbourn—also from Wokingham, and connected with a brewery there.9  W.W. Ogbourn most likely refers to William Webb Ogbourn. The letter of 1826, as well as the details of mutual acquaintances listed throughout the new 1833 letter, show that Ogbourn was firmly within Mitford’s social set, as well as known to her family;  the 1826 letter ends with Mitford  passing on her mother and father’s love to Ogbourn. 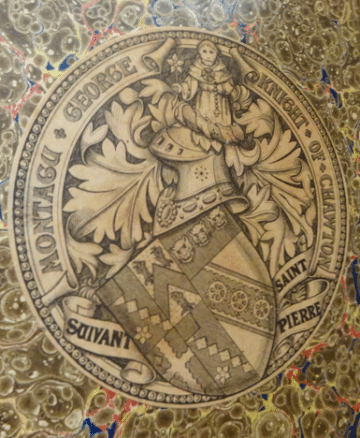 For our understanding of Mitford’s relationship with Austen; the development of Austen’s reputation amongst other women writers; and in contributing to the social history and import of the publication history of Bentley’s edition, this new acquisition cannot be overstated. As an addition to Chawton House’s collection, we will be able to display it alongside the very ‘entire collection’ of ‘Miss Austen’s works’ that Mitford is referring to, albeit from different owners. Chawton House’s Knight-family Bentley set, identifiable by the large circular bookplate of Montagu Knight (left) was likely acquired on publication by Austen’s brother Edward Knight. One wonders if Mitford signed her own ‘entire collection’, and if it is currently sitting somewhere in a private collection, waiting to be rediscovered.

4 My thanks to Peter Sabor for noticing and correctly transcribing the deixis.

5 This letter is the only known record of Mitford’s personal ownership of Austen’s novels, although her letters, diaries and references in her work, demonstrate when she read them. Mansfield Park and Northanger Abbey are the only Austen novels that we do not have a record of her reading.

6 Mitford writes letters to her father at this address in 1834 and 1837. The 1833 Annual Medical Reports of the London Opthalmic Infirmary lists a John Heathcote at this address. The Post Office London Directory of 1843 lists this as the address of Heathcoat & Co, the lace manufacturing company established by the inventor and later MP for Tiverton, John Heathcoat. At the time of writing the association between Ogbourn and Heathcoat is unclear, but the latter is clearly known to Mitford, who dedicates Sadak and Kalasrade, or The waters of Oblivion: a romantic opera, in two acts (1835) to him.

7 MS 3273 at Lambeth Palace Library: ‘Letter from Mary Russell Mitford, novelist, to W. W. Ogbourn, from Three Mile Cross, 8 September 1826, about the publication of her articles in various magazines, and mentioning various literary undertakings’ (f.98). Its contents were first published in the piece ‘Some Notable Women of the Past’ in Lippincott’s Magazine 54 (1894): 854.