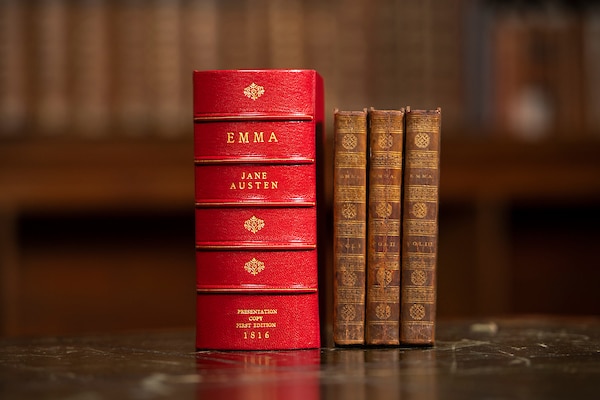 An inscribed copy of a Jane Austen novel has become the most expensive of the author’s works ever sold after being bought for a record £375,000.

The unique first edition of Emma achieved the highest ever sale price for any printed work by the celebrated novelist.

The three-volume edition – which carries the handwritten message ‘From the author’ inside – will now go on public display for the first time after its American buyer insisted it stay in the UK.

It has been deposited at Chawton House, the former home of the novelist’s brother Edward which also houses a unique collection of early women’s writing, spanning over 10,000 volumes.

Peter Harrington, the London rare book dealers who sold the book, helped connect the buyer to the library on learning of the new owner’s wish for the book to remain in England. The deposit ensures the public will have access to this unique presentation copy.

This copy of Emma is the only presentation copy of an Austen novel with a written inscription known to exist. As was the custom, the book is inscribed by the publisher rather than Austen herself and was presented to the recipient at the author’s request.

The author is not known to have signed any of her own books herself. 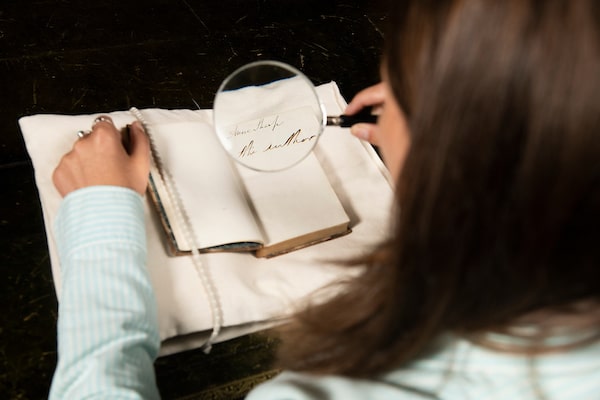 Published in 1815, Emma was the last of Austen’s novels to be published during her lifetime.

The author sent one of 12 special presentation copies of the novel to Anne Sharp, a dear friend of Austen’s and governess to her brother Edward’s children.

Significantly, of all Austen’s novels, Emma shows the most awareness of the position of the governess, a decision surely influenced by her friendship with Anne Sharp. There are several echoes of Anne Sharp’s social position and character in that of Miss Taylor (whose first name is Anna) in Emma.

Anne Sharp was also part of the intimate circle among whom Austen circulated copies of her novels, providing feedback on Pride and Prejudice, Mansfield Park and Emma.

“The buyer of this unique copy of Austen’s Emma, who resides in the US, expressed his wish for the work to stay in England and asked if we could recommend a suitable institute or museum that would be happy to receive the book as a deposit. We immediately thought of Chawton House – given its connections to both Austen and her brother Edward, as Anne Sharp served as governess to his children,” said Pom Harrington, Owner of Peter Harrington.

Curator of Chawton House Emma Yandle described the moment she found out about the offer as a ‘pretty special call to get’ as there had been fears the volumes would leave Britain for the USA.

“When we heard the book had been sold we were worried it was going to disappear to America,” she said.

“It’s a very moving story. Jane Austen finds this person in her governess who is on her intellectual level and the book is a doorway into their friendship.

“Everybody knows what it’s like to give a book as a gift. It feels very validating to have been chosen to look after the book, especially as we approach our 20th anniversary.”

Katie Childs, Chief Executive of Chawton House said: “We’re delighted such a significant work of Jane Austen’s will take its place amongst the literary treasures in our collection.

“It is wonderful to imagine these two intelligent women finding each other in such an unlikely place and creating a supportive coterie in which genius might flourish. Part of Chawton House’s mission is to replicate this very concept, encouraging and promoting research into women’s writing.”

“She was part of the intimate circle among whom Jane circulated copies of her novels and recorded their responses.

“Jane took Anne’s reactions to her novels seriously, asking her to be ‘perfectly honest’ in her assessments, and noted her comments in her logbook.”

Adam Douglas, Senior Specialist at Peter Harrington said: “This book was sent by Austen to a friend who gave her critical feedback.

“This is someone she really knew intimately and it takes us right into the world of Jane Austen.”

The book is due to go on display at Chawton House – which lies close to the novelist’s former home, now known as Jane Austen’s House – early next year, to coincide with their 20th anniversary celebrations. 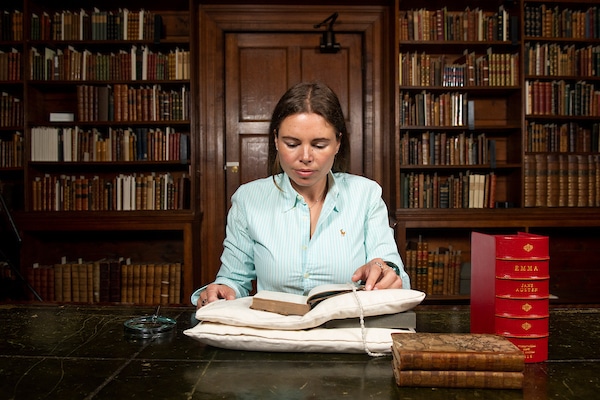