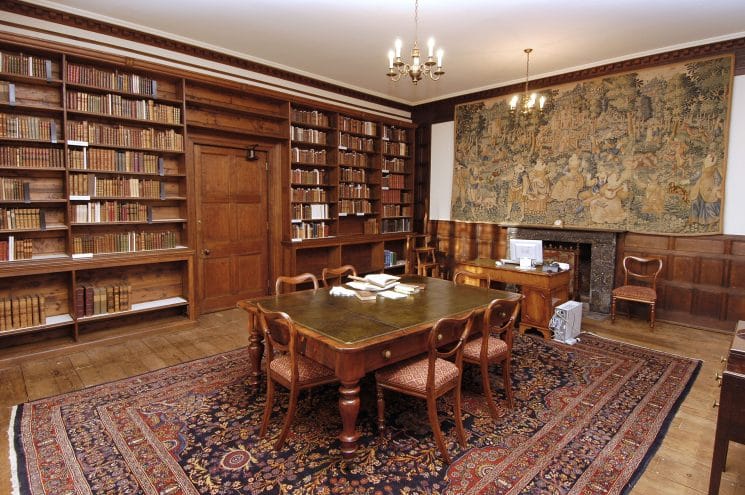 The Library at Chawton House

This week’s blog, inspired by the donated benches that are part of the North American Friends of Chawton House Share a Bench with Jane campaign, will examine the role of libraries in Georgian Britain and how books became accessible and loved by the masses.

During the 18th century people increasingly read for pleasure, an activity that could be enjoyed at home in solitude but also in small groups, with literature discussed at length with friends and family. This change occured alongside the rise of the novel, which sought to educate and improve, but primarily to entertain.

“Lady Bella went up to her apartment, and betook herself to her Books. Which supplied the place of all company to her.”

Private libraries were initially seen as a sign of wealth and prestige, a way for a gentleman of high standing to project his authority in life and to show off his fortune. It was rare to find a vast collection of books-particularly leatherbound volumes-outside of universities or churches. The books in these collections often served the purpose of improving one’s social graces, education and moral conduct: religious works, Eurocentric history, and conduct literature. Until 1861, the tax on paper meant that books were expensive and considered luxuries.

“I was known to possess a fortune, and to want a wife.”

It was often the case that a reader would have to rely on borrowing books from richer friends or relatives to expand their knowledge. Jane Austen, whose clergyman father had a remarkably large library, also had access to her brother Edward Knight’s library during stays with him at Godmersham. Austen enjoyed reading with her family, and subscribed to a circulating library. Subscription libraries were supported by private funds raised by membership fees or endowments, and access was often favourably given to the higher members of society. Jane Austen wrote in a letter to her sister in December 1798:

“I have received a very civil note from Mrs. Martin, requesting my name as a subscriber to her library which opens January 14, and my name, or rather yours, is accordingly given. My mother finds the money. […] As an inducement to subscribe, Mrs. Martin tells me that her collection is not to consist only of novels, but of every kind of literature, &c. She might have spared this pretension to our family, who are great novel-readers and not ashamed of being so; but it was necessary, I suppose, to the self-consequence of half her subscribers.”

An individual could purchase a first-class library subscription, entitling them to 10 to 15 volumes a year, depending on their proximity to town. Second- and third-class subscriptions could also be purchased at a lower cost, with fewer benefits. 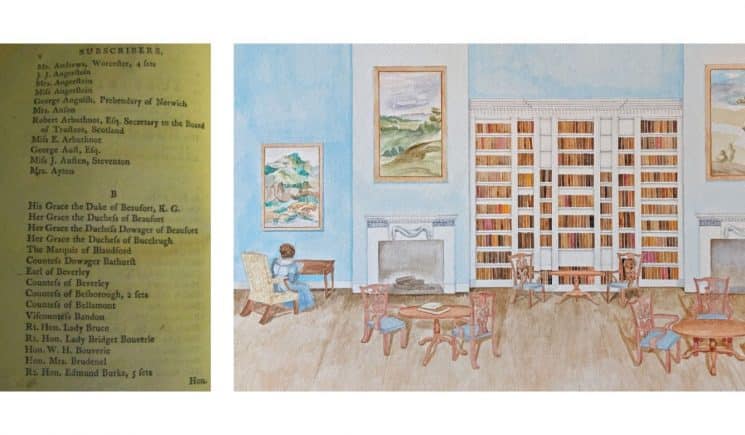 Left: Jessica Joyce’s ‘Reading with Austen’, an artist’s interpretation of the library at Godmersham. Right: Jane Austen’s name in the subscription list for Frances Burney’s Camilla.

“I went up to the Great House between three and four, and dawdled away an hour very comfortably.”

Jane Austen in a letter to her sister Cassandra, 13th June 1814

However beneficial to the well-off, subscriptions were still too costly for the general public, but the widespread demand for books continued to rise. This period saw a significant rise in literacy levels, with male literacy growing from 10 to 60% in the latter half of the 18th century, and women’s rising to around 40%. This shift was in part propelled by the concern that every man should be able to read the Bible. Thus, reading became more commonly taught amongst the labouring and merchant classes, with funding from the Church of England. Additionally, the illiterate could still engage as books were read aloud in local taverns and parish meetings.

“No entertainment is so cheap as reading, nor any pleasure so lasting.”

Lady Mary Wortley Montagu to her daughter the Countess of Bute, 1753 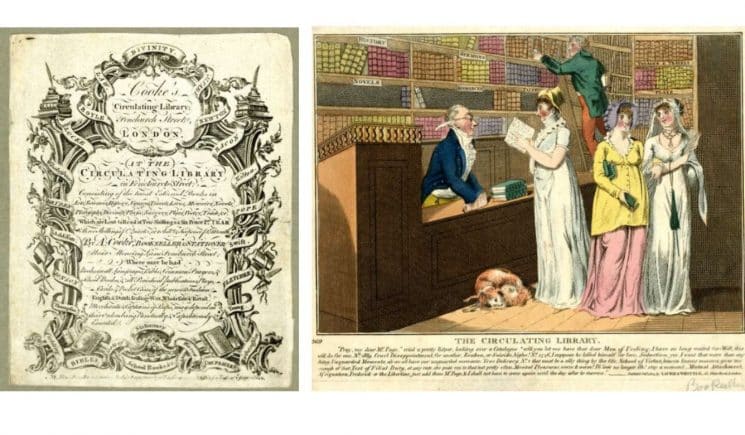 Access to books for the lower classes was improved with the establishment of circulating libraries offering shared annual subscriptions, an innovative way for a community to attain what was considered a luxury. Newspaper societies were formed in local parishes, where a group of people would all contribute a weekly sum, usually around a sixpence a week, to gain access to London newsletters. Poorer districts meanwhile would manage by forming larger groups to bring the cost down. Around 5,000 of these newspaper societies were operating by the 1820s. Booksellers of London also created their own circulating libraries, with around 30 in London alone by 1825. Nine of these circulating libraries featured reading rooms, where people could sit and read, in a similar way to our libraries today. Public libraries became the social hub for many parishes, where people could read, gossip and flirt. A large percentage of materials on offer were religious in nature, reflecting the original motivation behind educating the masses, but novels were also extremely popular across all class lines. For example, the novels of Minerva Press, that published six of the seven horrid novels recommended by Isabella in Northanger Abbey, were read by all levels of society. 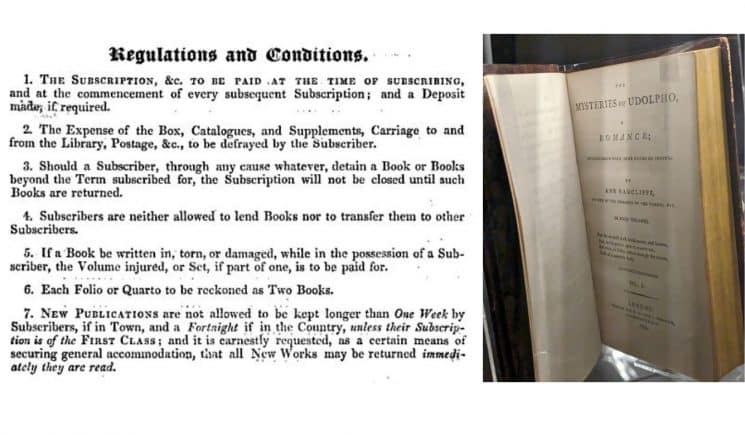 Left: The rules of the library in Georgian England. Right: our copy of Ann Radcliffe’s Mysteries of Udulpho, another Gothic novel that Catherine and Isabella discuss in Northanger Abbey.

“That perfect Tranquillity of Life, which is nowhere to be found but in Retreat, a faithful Friend and a good Library.” 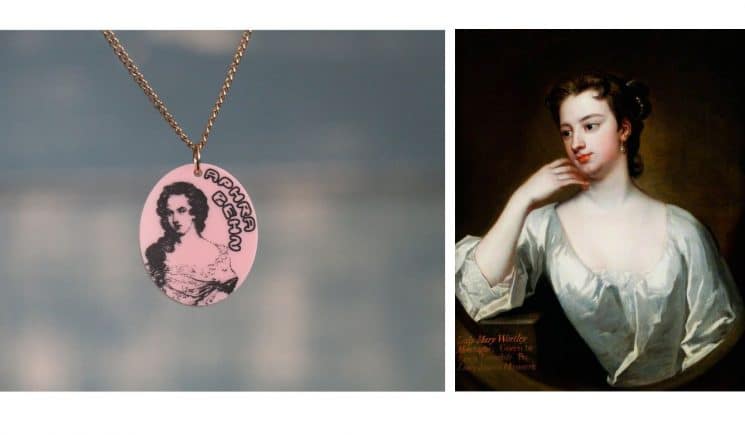 Northanger Abbey has been read by some as a didactic attack on the over-stimulation that novels could generate in young impressionable readers. Catherine Morland is often seen blurring reality and fiction as a direct result of her enjoyment of Gothic novels. However, it is more likely that Austen was encouraging her readers to read judiciously. In fact, reading is one of the qualities that Mr Darcy, arguably the most captious of her heroes, reveres in a lady: he notes, “she must yet add something more substantial in the improvement of her mind by extensive reading.” 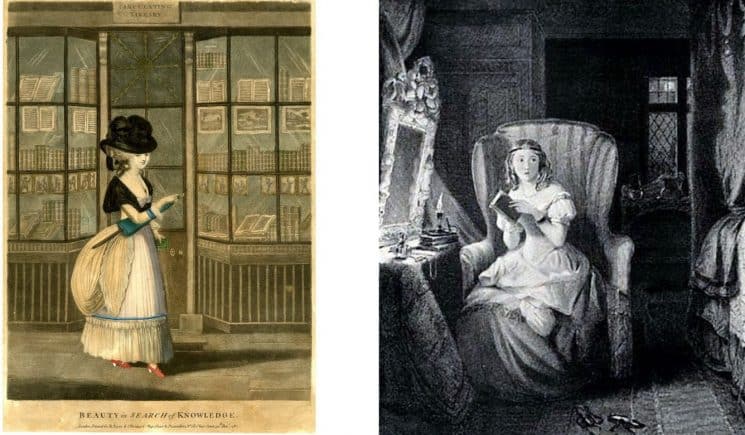 “If you have a garden and a library, you have everything you need.”

Whilst free public libraries were far from new in the Georgian era, with examples found in Ancient Greece and Rome, it was in Regency Britain that libraries shifted from repositories of higher education and exclusive academic topics to places of societal pleasure and entertaining literature. Without the subscription library and the public it catered to, it is highly possible that many of our most beloved classics, including all of Austen’s novels, would never have been published at all.

Next week we will be looking at the role of the domestic garden in Georgian Britain, exploring some of the ways that Regency families used and decorated their gardens, and how they served as both places for private courtship and as locations of extravagant social gatherings.