“Is it a man, a woman
Is it an angel, a demon?
I am the complete being
I exist by myself alone
And have resolved the problem
Of Plato’s androgynes.” 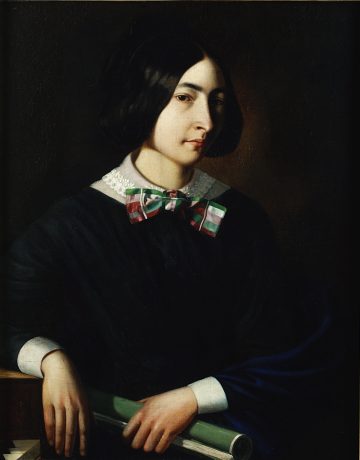 Portrait of George Sand, which hangs at Chawton House, Jean-Baptiste, 1847

Born Amantine Lucile Aurore Dupin, the French authoress George Sand (1804- 1876) was one of the most popular writers in Europe in her lifetime, with her novels outselling Victor Hugo’s works in England in the 1830s and 1840s.

Sand adopted a pen name, refusing to be limited to being just a woman writer. Although in English George is a typically male name, in French the conventional way to spell it is Georges with an ‘s’ at the end. This pseudonym, which is neither quite feminine nor masculine, was a disguise that allowed Sand to move freely and thrive in the Parisian literary arena of the early 1830s. The tone of her novels is subversive with the theme of androgyny often highlighted in the stories she recounts.

Sand was one of many notable nineteenth-century women who chose to wear male attire in public. In 1800, the police issued an order requiring women to apply for a permit in order to wear male clothing. She did so without a permit, justifying the action by arguing that dress worn by noblewomen was far too expensive. What was more important for Sand however, was that wearing male dress made her invisible and no longer the object of the male gaze. She could become the one who observes and thus assume the role of the writer.

In her seminal work A Room of One’s Own, Virginia Woolf refers to George Sand along with George Eliot and Charlotte Brontë as: “all victims of inner strife as their writings prove [who] sought ineffectively to veil themselves by using the name of a man”.aiming writing as a feminine activity.