“Our Heroine still maintained her wonted intrepidity; and behaved in every respect, consistent with the character of a brave British soldier.”

The Female Soldier; Or, The Surprising Life and
Adventures of Hannah Snell, 1750 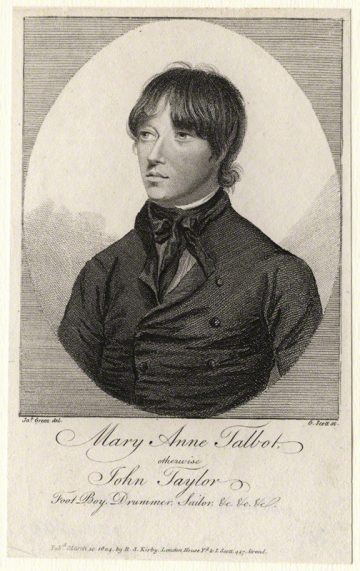 Although uncommon, there are several instances in the 1700s and early 1800s where women dressed as male combatants. This was by no means an easy task, given that the extent of women’s engagement in the military was mostly as unpaid camp followers. However, both Hannah Snell and Mary Ann Talbot fought for their country, claiming remuneration and later giving written accounts of their military exploits to the public. Hannah Snell (1723-92) served as a British marine and fought the French in India. Born the eighth of nine children, she married James Summes, a Dutch seaman in 1744. When Summes abandoned her, she took her brother-in-law’s name and clothes to look for Summes and, at Coventry, enlisted in the infantry. She left the British Army and joined the Royal Navy, receiving several bullet wounds in the line of fire. Snell sought a pension from the Duke of Cumberland, who accepted her certificate of wounding and made her an out-pensioner at the Royal Chelsea Hospital on £30 a year. She later found success appearing on stage in her uniform presenting military drills.

Mary Ann Talbot (1778-1808) alias John Taylor, was a soldier and sailor during the French Revolutionary Wars. The natural daughter of Lord William Talbot, her upbringing was unsettled, being moved from one guardian to the next. Talbot eventually became the mistress of Captain Essex Bowen, who enlisted her as his footboy on board his ship. Serving in the Royal Navy, she fought at the Siege of Valenciennes in 1793, which resulted in a musket ball to her ribs and a sword wound in the small of her back. Returning to England, she died aged thirty in greatly reduced circumstances.

How did they get away with it?

Whilst on board ship, Hannah Snell had to pass her urine through a leather horn to hide her gender. Rationed to just one pint of water a day for seventeen weeks, perhaps dehydration made the subterfuge easier! 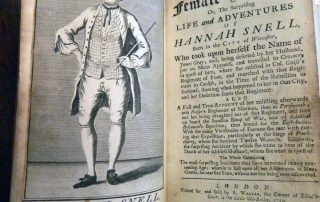 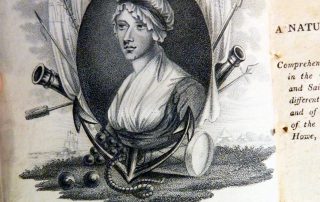 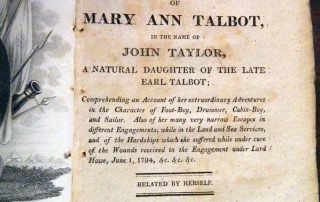