Trowelblazer or iconoclast? Lady Hester Stanhope and women in archaeology

Home>Events>Talks>Trowelblazer or iconoclast? Lady Hester Stanhope and women in archaeology
Previous Next

Trowelblazer or iconoclast? Lady Hester Stanhope and women in archaeology 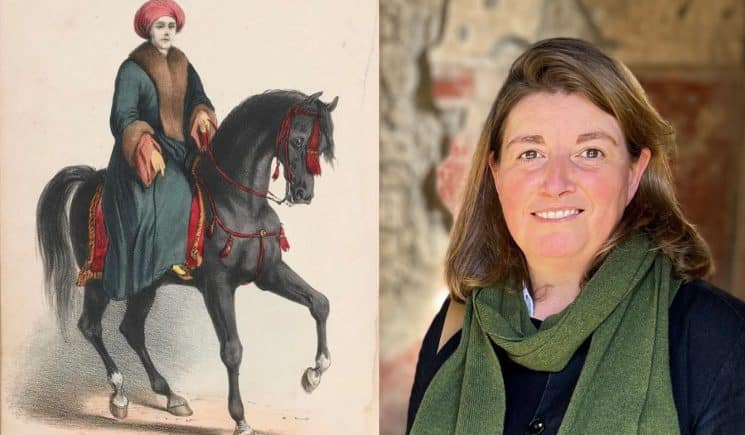 In April 1815, just shy of her 40th birthday, Lady Hester Stanhope led an expedition to Ashkelon (an ancient town on the coast of Palestine) in search of buried treasure. From her home in Lebanon, she had come into possession of a medieval Italian manuscript, that seemed to reveal the location of a hoard of three million gold coins, hidden beneath the ruins of the city’s mosque. Stanhope couldn’t resist the challenge, and convinced the Ottoman Sultan Mahmud to grant her permission to excavate the ancient site, becoming the first Westerner – and first woman – formally allowed to do so. With a team of local workers and her companion Dr. Charles Meryon, Stanhope’s dig went beyond the opportunistic treasure-hunting common at the time, to record in detail the process of the dig, and consider how the layers of rocks uncovered told the story of different periods in the building’s history.

Whilst this modern approach marks Stanhope out as an important woman in the field of archaeology, her treatment of the artifact she discovered calls her legacy into question. Despite their best attempts, no gold was found at Ashkelon, but the torso of a huge marble statue – over 6 feet long – was unearthed. To demonstrate her allegiance to the Ottomans and prevent accusations that she planned to steal the find for herself, Stanhope ordered for it to be smashed into a thousand pieces, and thrown into the sea.

In this online talk, Emma Yandle, Curator of the exhibition Trailblazers: women travel writers and the exchange of knowledge, will delve further into Lady Hester’s appreciation of ancient heritage during her travels, culminating in her controversial archaeological dig. She will place it in the context of the contemporary rush to acquire artefacts from the Ottoman Empire to furnish collections and museums in Western Europe – a year before the case of the Elgin Marbles went before the British parliament.

She will be followed by Dr. Sophie Hay, an archaeologist who has worked in sites across Italy, Belize and Libya. Hay will tell the story of her own career in archaeology, including years spent working on one of the world’s most famous archaeological sites: Pompeii. She will demystify some of the methods and aims of archaeological practice today, and talk about her current book research: focusing on 250 years of excavation at Pompeii and the highly significant – but less frequently celebrated – contributions made by women.

The talks will be followed by a Q&A with the speakers, reflecting on the status of Lady Hester Stanhope as a woman in archaeology, Hay’s career, and comparisons between archaeological practice across the centuries.

Hay began her archaeological career working in Pompeii on a project led by the British School at Rome that sought to understand daily life in a block of Roman houses. She excavated in places such as Libya, Belize and Italy, before hanging up her trowel to conduct archaeological geophysics surveys at the University of Southampton, ranging from individual monuments to entire townscapes, and sites in Sudan, Turkey and Tunisia. She has now returned to her first love: Pompeii, with her current book research focusing on the 250 years of excavation of the site and the highly significant – but less frequently celebrated – contributions made by women. @pompei79