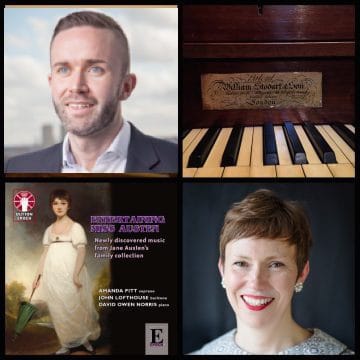 ‘Yes, yes, we will have a Pianoforte as good a one as can be got for 30 Guineas – & I will practise country dances that we may have some amusement for our nephew & nieces, when we have the pleasure of their company.’ – Jane Austen to her sister Cassandra, 27 December 1808

The pieces for this concert, performed by Amanda Pitt (soprano) and Gavin Roberts (piano) will be drawn from seventeen music albums that belonged to Jane Austen and her female relations. Eight of the albums are held by the Jane Austen House Museum in Chawton, Hampshire, and are well known. The remaining nine, in private ownership, have recently been deposited in Chawton House Library, where this concert will take place. Research of the entire collection led by Professor Jeanice Brooks of the University of Southampton has yielded new insights into the Austen family’s musical life.

Amanda Pitt performs a wide range of repertoire from opera to contemporary music. She has sung at many of the major London venues and around the world, giving several world premieres. Her recordings include music by Elgar, Quilter and music from Jane Austen’s family collection. Amanda has had many successful collaborations with the pianist David Owen Norris. A Sunday Times review of a recital using Clara Schumann’s piano said “…Pitt put [Frauenliebe und leben] across with simplicity and conviction, her husky vibrato a natural throb of passion.”

Gavin Roberts has performed at Wigmore Hall, the Barbican Hall and the Royal Festival Hall, and is Artistic Director of the recital series Song in the City, for whom he has devised more than 100 recital programmes. He has appeared at The Cheltenham Festival, Dartington International Festival, The Ludlow Weekend of English Song, The Young Songmakers’ Almanac, and The Oxford Lieder Festival, as well as on numerous BBC Radio broadcasts and CD recordings. He studied at the Guildhall School, where he is now a Professor, and is Organist and Director of Music at St Marylebone Parish Church. www.gavinroberts.org & www.songinthecity.org

During the daytime, prior to this concert, there will be a day of workshops and talks at both Chawton House Library and the Jane Austen House Museum. For full details, click here.