Of False Hair, Bolstered Hips and Witchcraft: The Act of Parliament that Never Was

Home>Events>Of False Hair, Bolstered Hips and Witchcraft: The Act of Parliament that Never Was
Previous Next

Of False Hair, Bolstered Hips and Witchcraft: The Act of Parliament that Never Was

In this fascinating talk, award-winning speaker Alison Daniell discusses the Matrimonial Act 1770 (or, as it is more commonly known, The Hoops and Heels Act 1770), which ostensibly permitted husbands to divorce wives who had seduced and betrayed them into matrimony by using perfume, make-up, heels and other commonplace beauty aids; the wives were also to ‘incur the penalty of the laws now in force against witchcraft, sorcery, and suchlike misdemeanours’. The catch? It’s a fake law! Join Alison as she discusses some of the cultural factors associating women’s power over men with witchcraft and a mutable female body.

This talk takes place online and will be followed by a live Zoom Q&A. 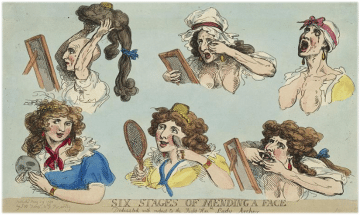