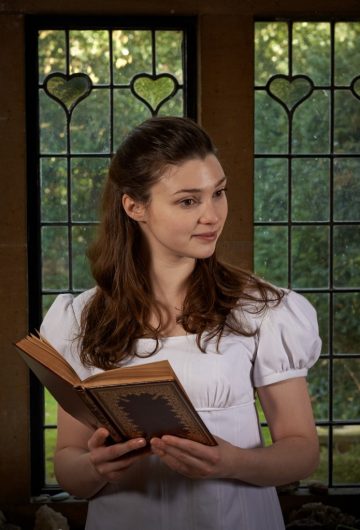 The Archers actor, Emma Grundy, to play Jane Austen in a recital-performance at Chawton House Library.

Emerald O’Hanrahan, the voice of Emma Grundy in The Archers, is to play the title role at Chawton House Library in Jane Austen at Home, a costumed solo recital-performance based on extracts from Austen’s letters, poetry, novels and juvenilia.

The piece highlights the variety and wit of Austen’s writings and shows much of her perceptive and often satirical observation of the social life of English country families in the early 1800s.

The performance is on Saturday, 4 October, with a matinée at 2.00pm and an evening performance at 6.45pm. Refreshments will be served beforehand and are included in the ticket price.

Jane Austen at Home is produced by Jeremy Musson, an author, broadcaster and historic buildings expert, and devised and directed by Stephen Siddall, who has directed for BBC2 and the Cambridge Arts Theatre.

Emerald O’Hanrahan is a graduate of Bristol Old Vic Theatre School and winner of the BBC Carleton Hobbs bursary award. Her TV credits include Silk and Casualty.

Producer Jeremy Musson said: “The mixture of extracts that we’ve selected from Jane Austen’s writings is very unexpected, as it splices up the real and the imagined and follows a line through Austen’s life – the audience is moved to both laughter and to sadness.”

He added: “You feel you are with Jane Austen as she drafts or acts out these passages or writes or performs her juvenile writings for the amusement of her family, or drafts or reads the moving letters from key moments in her experience.”

Chawton House Library, a leading study centre in Chawton, Hampshire, aims to educate and inspire people of all ages to read the works of early English women writers from 1600 to 1830 and preserve the literary heritage for academics and non-scholars for generations to come.

The house itself is regularly open to visitors, alongside library readers, for tours and during public events.  It also provides research facilities for Visiting Fellows from around the world, learning projects with local schools and colleges and fosters links internationally through seminars and conferences.

Read Jeremy Musson’s blog post for more information about the inspiration behind the production.