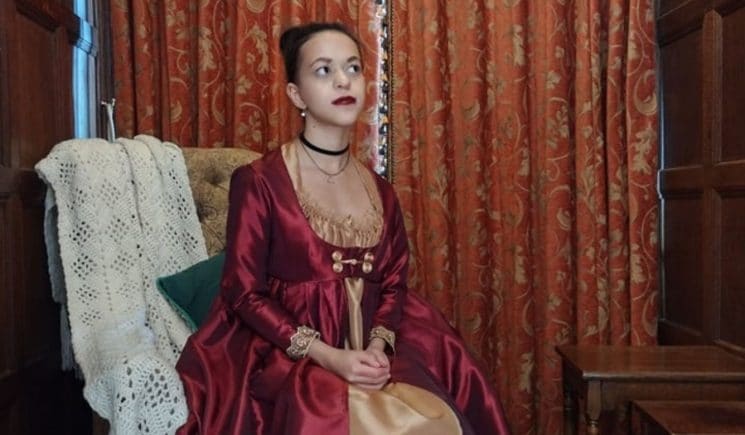 Visit Chawton House after dark and enjoy a performance of the chilling festive tale The Old Nurse’s Story by Elizabeth Gaskell. Enjoy a glass of mulled wine and a mince pie before the story commences.

The Old Nurse’s Story will be performed in three acts through the House and promises to be a spooky start to the festive season.

Refreshments will be served at 7pm, with the story commencing at 7.30pm.

Elizabeth Cleghorn Gaskell (1810-1865) was a prominent writer and biographer during the Victorian era. She is known for writing the biography The Life of Charlotte Brontë (1857) and for writing Cranford (1851-53) and North and South (1854-55). Gaskell was also known for writing short, gothic tales, often with the support of Charles Dickens. One such tale, The Old Nurse’s Story, published in 1852, depicts a classic gothic ghost story with a moral lesson. Told as a framed narrative and filled with ominous elements, The Old Nurse’s Story, highlights Gaskell’s gothic writing and cathartic story-telling abilities.

Charles Dickens greatly admired Elizabeth Gaskell, whose story Lizzie Leigh opened the first number of his weekly Household Words on 30 March 1850. She became a regular contributor (Cranford and North and South, among other items), though her craftsmanship often vexed him and she could be patronizing about the “Dickensy periodical…I did so hope to escape it.” She also regarded as “good enough for Dicken” stories unworthy for classier magazines. The Old Nurse’s Story, her first ghost story, was contributed by invitation to the 1852 special Christmas issues, A Round of Stories by the Christmas Fire, and several others appeared in later issues. The story was collected in 1865 in Cousins Phillis and Other Tales.

Gaskell loved telling ghost stories, and on one occasion she claimed to have seen a ghost.

Sasha is one of our amazing General Assistants at Chawton House, but when she is not working here, is a young actor, trained in Musical Theatre and Straight Acting. She earned six distinctions for her Level 3 Performing Arts Extended Diploma and Stage Management course at Queen Mary’s College in July 2020. Prior to this, she has had seven years training at Stagecoach Performing Arts. Sasha has also performed in shows taking place at Her Majesty’s Theatre in London, The Anvil Theatre in Basingstoke and at Disneyland Paris.