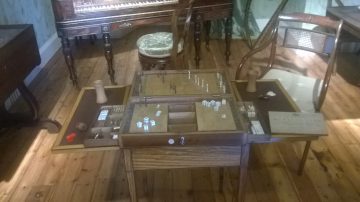 Anne Young’s Musical Game laid out and ready to be played at the Decorative and Arts History building, Museum of Ireland

Using games to teach may seem like a modern concept but, in 1801, Edinburgh-born Anne Gunn decided to invent, patent and publish a musical game as a better way to teach music to children.

Two copies of the physical game have survived and are available to see at the Decorative and Arts History building, which is part of the Museum of Ireland and the V&A in London. The patent (available at The Mitchell Library in Glasgow) appeared to be the only instructions on how to play the six versions of the game. But the dry, legal language of this document was difficult to interpret and any instruction booklet sold with the game was an item lost in the realms of history. 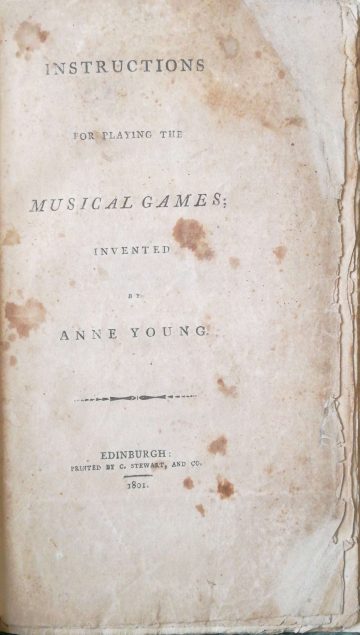 Within the recently acquired books donated to Chawton House Library is none other than Instructions for playing the musical game by Anne Young, 1801 and another book published in 1803 called An introduction to music in which the elementary parts of the science and the principles of thorough bass and modulation as illustrated by the musical games and apparatus are full and familiarly explained.

The 1803 book is even more intriguing than the 1801 instructions as it offers a preface discussing Anne’s reasons for inventing the game and notes ‘some of the most intelligent and judicious masters’ gave it ‘a degree of attention and approbation’. Today, Anne’s game is quite unknown. Yet, it merited a further publication two years after its invention, which means it must have attracted some popular attention in its day.

Who is Anne Gunn?

Even the inventor is fairly unknown and is often a mere footnote in the biography of her successful husband John Gunn (c.1765–c.1824) who was famous as a cellist and writer of music education manuals. His wife warrants much more personal attention considering she was the only woman to receive a patent in 1801 and the first person to receive a patent for an educational game designed for musical ‘amusement and instruction’.

These books reveal more biographical information as she describes herself as having ‘considerable experience in teaching’ young ladies. Her insights into teaching are a rare account of the problem of repetition as a means of learning being boring for both teacher and student. Therefore, the invention of this game was an attempt to make music education more fun for both parties.

How is the musical game played? 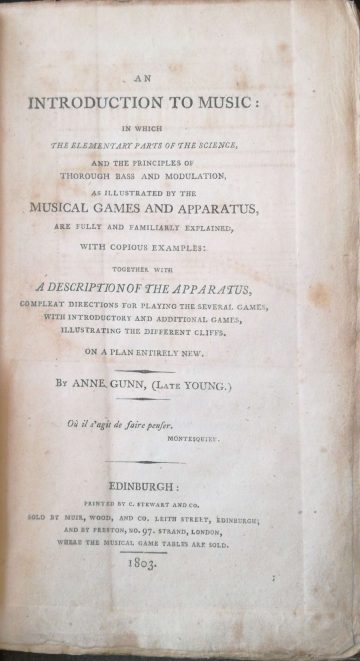 Though the game is described as ‘the musical game’, it is in fact six games in one. Or the game could be described as having six different levels as the various versions increase in difficulty. Included in the set are dice, pins, counters and an intricately designed board. Even the dice are unique as each side relates to different symbols in music notation. The only thing not included in the game is a musical instrument, which is necessary for play.

Anne admitted in her 1803 book that the original instructions were really only suited to those who already had a basic knowledge of music theory but the new publication was written to allow those who had no music knowledge to play the game as she included detailed information about music theory. To be honest, even as an experienced musician, I still found the 1803 book to be too technical for a non-musician. Then again, without the physical game in front of me, it is difficult to judge how easy it would be to pick up the instructions and play.

While the logical answer might be to bring all of the elements of this game together (including the board, instruction books and patent) the discovery of these books in the Chawton House Library will allow for more research to be done on different approaches to music education, the history of games and the books themselves. It also brings to the forefront an intelligent and fore-thinking woman, who until recently had been completely forgotten for her contributions to music and education.