Home>Posts>Woman Writer of the Month>Woman writer of the month: Elizabeth Blackwell
Previous Next

Our second woman writer of the month is Elizabeth Blackwell, whose influential and beautifully illustrated A Curious Herbal is in the Chawton House Library collection. 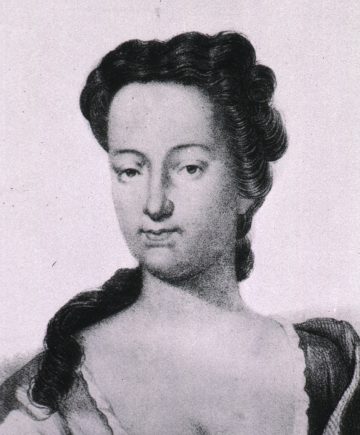 Elizabeth Blackwell, a 1737 lithograph by Villain.

Elizabeth Blackwell (nee Blachrie), a merchant’s daughter, was born c.1700 in Aberdeen, Scotland. After her marriage to Alexander Blackwell, the couple were forced to flee Aberdeen when he was challenged for practising medicine without a licence. In London, and with the help of his wife’s dowry, Alexander set up business as a printer. Once again he failed to follow the obligatory trade regulations, and was fined. Alexander’s inability to pay the fines, and his mounting debts, saw him thrown into debtors’ prison.

In order to provide for herself and her child, the resourceful Elizabeth determined to produce a herbal (an illustrated book of plants describing their uses in medicine). Like many young women of her class, she had received tuition in drawing and painting. She made detailed botanical drawings of plants, and later took them to Alexander in prison where he would use his medical knowledge to provide descriptions for their use. Elizabeth painstakingly sketched, engraved and hand-coloured each illustration. Between 1737 and 1739 she published four plates each week until she had produced 500 images. The complete work was then published in two volumes as A Curious Herbal containing five hundred cuts of the most useful plants, which are now used in the practice of physick, to which is added a short description of ye plants and their common uses in physick. Her achievement would normally have taken three artists and craftsmen. 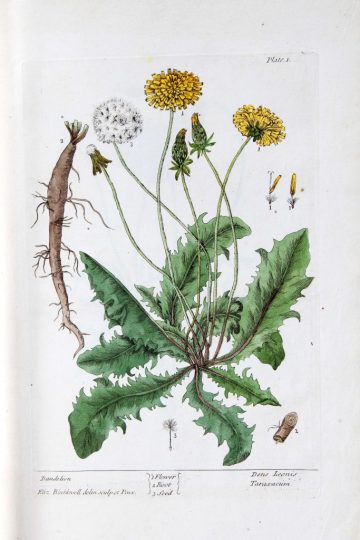 Blackwell’s beautiful illustration of the dandelion includes drawings of seeds and progression of growth.

Until this point in the mid-eighteenth century, all of the major English herbals – Gerard (1597), Parkinson (1640), and Culpeper (1653) – had been produced by men. Blackwell’s mid eighteenth-century herbal appeared at a critical moment that saw the gradual emergence of botany as a science distinct from simply the medical uses of plants. By the end of the eighteenth century, botany had become widely accepted as a suitable branch of scientific study for women.

Chawton House Library’s Walled Garden is home to a herb garden dedicated to Elizabeth Blackwell’s work. Opened in July of 2016, the garden contains some of the very species that Blackwell studied and drew. The plants are arranged by their various medical benefits, as Blackwell herself might have categorised them. We welcome visitors to the beautiful Chawton House gardens, and several garden tours and events will take place this April.

Elizabeth Blackwell’s A Curious Herbal is one of the Librarian’s Selection of books for our Adopt a Book program. For as little as twenty-five pounds, you can adopt A Curious Herbal or another book in our collection. Your contribution will help preserve your chosen book, and more than 15,000 other books in the Chawton House Library collection.