‘It is more to my personal happiness and advantage to indulge the love and admiration of excellence, than to cherish a secret envy of it.’ –Elizabeth Montagu

Our woman writer of the month for May is Elizabeth Montagu, a prolific writer of letters and essays and a leader of the Bluestocking Circle in the second half of the eighteenth century. Born into comfort and married into affluence, Montagu used her wealth of wit and wallet to leave a considerable impression on the social and literary landscape of her time. 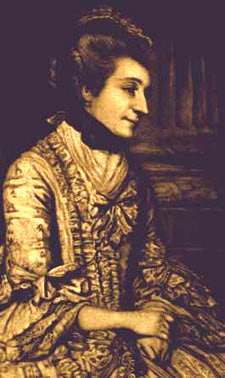 Montagu’s correspondence throughout her life was constant and lively, beginning early in her youth. A collection of her letters was published in 1809, almost a decade after her death, by her nephew Matthew Montagu. It received great acclaim from the Critical Review of the day, which praised Elizabeth Montagu as “exhibit[ing] proofs of sagacity, judgment, and reflection, a knowledge of life, a discrimination of character, a comprehension of view, and an acuteness of observation.” Another collection of letters, entitled Elizabeth Montagu, The Queen of the Bluestockings. Her Correspondence from 1720 to 1761 was published in 1906, and a continuation of that work, stretching from 1762 to 1800, followed in 1923.

Montagu became friends with the writer Elizabeth Carter in 1758. The two women soon became the centre of the new Bluestocking Circle of London. Meeting often in Montagu’s London house, the group aimed to create a social circle based not on superficial gossip or games, but rather on serious intellectual discussion open equally to both sexes. The conversations of the members were valuable, but even more important today are the writings and correspondences inspired by the group. The Bluestockings gained fame rapidly, though not all portrayals were positive ones. 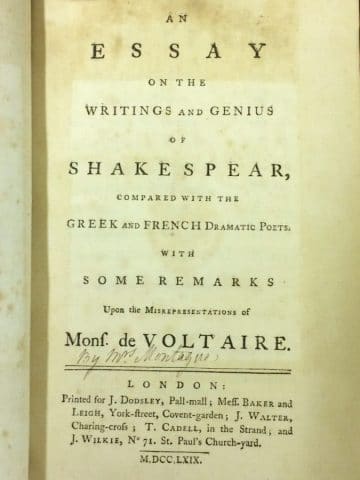 Though Montagu’s work was published anonymously, this owner seems to have his suspicions. This first edition of Montagu’s essay is in the Chawton House Library collection.

Montagu rarely published under her own name, but she did publish anonymously. Two articles written in the Journal Britannique in 1750 are believed to be hers, signed with the initials E.M.. Montagu also contributed anonymously to Lord Lyttelton’s Dialogues of the Dead, writing three dialogues. In 1769, Montagu responded to Voltaire’s criticisms of Shakespeare by publishing An Essay on Shakespear. Her essay was a patriotic defence of Shakespeare that gained wide readership and critical acclaim.

The death of Montagu’s husband in 1775 left her wealthy in her own right. Montagu responded to this prosperity with increased generosity. She gave grants to many writers of the day, focusing her gifts especially on female writers. She also helped organise subscriptions for many other writers, including Ann Yearsley, another writer in the Chawton House Library collection. Yearsley was one of the few working-class women (described as a milkwoman) of the era whose writing made it into print. Her work included A Poem on the Inhumanity of the Slave Trade (1788). Through this financial support for writers of her time, as well as her extensive friendships and correspondence, Montagu’s influence on the literary world of the late eighteenth century extends far beyond her own writings.