Spurred on by the abundance of apples in our Walled Garden, one of our staff decided to try a recipe from the Knight Family Cookbook. Here are the results…

It all began so well, apple scrumping in Walled Garden with Corinne and Toby as the misty dusk settled upon us. The choice of apples were innumerable, perfect for the picking. Clearly the evening Orchard Wassail in January worked and our toasting around the Bramley tree promoted a good harvest! 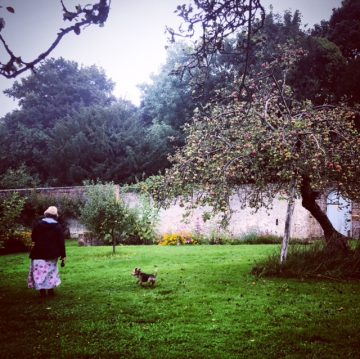 Scrumping in the Walled Garden with Corinne and Toby

The trouble, however, lay in the baking itself. I would like to assert that I am by no means a bad baker. My bakes might not earn the coveted ‘Hollywood handshake’, but in general they receive no complaints. Certainly no harsh criticism. Except perhaps the bacon brownies…

I wanted to make use of all of the delicious apples I’d picked, and using a recipe from the Knight Family Cookbook seemed most apt. There was just one recipe with apples in, titled ‘To make an Apple-Tansey’. The Janeite in me was enraptured, thinking that perhaps Jane Austen herself had tried these. It seemed simple enough, albeit vague:

Take 12 eggs, 6 whites, beat them very well, sugar to your taste. Some lemon peel grated & as many apples, shred small as will thicken it, mix well together and fry it in butter. When its enough shower sugar on it and serve it up with lemon.

The lack of direction did somewhat alarm me – ‘some lemon peel and as many apples’ being one such. But what particularly took me back was the sheer magnitude of eggs. What kind of recipe only had four ingredients, one of which was 18 eggs?! How many tansies was I expected to make? How many apples were needed to balance out the produce of half a poultry farm? I decided to half the egg quantity. I wish I had quartered it. 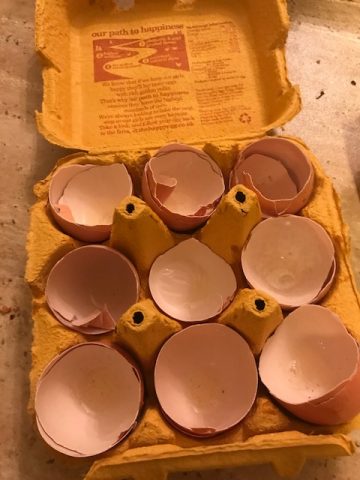 This is no yoke, I was egg-stremely worried

By now I’d sugared the mountain of eggs, whisked them up and added the grated apples and lemon zest. Hitherto this point I hadn’t been too worried. Yes, nine eggs did seem like a lot. But with sugar, lemons and apples, the taste couldn’t possibly be bad. Well, it turns out consistency is rather important. And having all the apple lumped at the bottom of the bowl, with a frothy eggy mess at the top is not particularly reassuring. 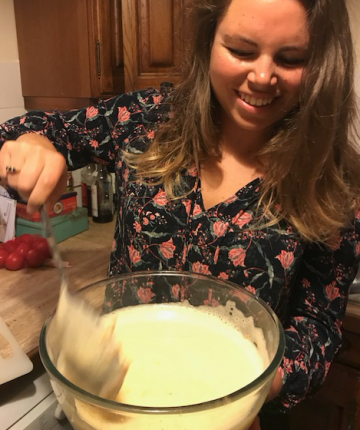 Smile away the doubt

Once I’d mixed the ingredients as best I could, I was faced with the difficulty of frying it. Clearly I couldn’t do the whole thing in one go. It would take a pan the size of a bath tub to do. But a large spoonful tended to be all egg or all apple. I found scooping the mixture up as quickly as possible and bunging it in was the only solution. This I duly did and the result appeared to be a cross between a pancake and an omelette. 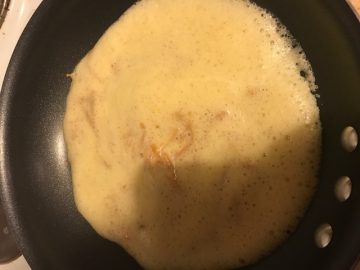 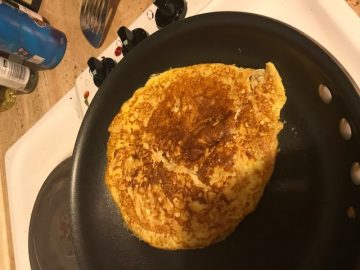 The moment of truth had arrived. Though my expectations weren’t astronomical, I didn’t feel too disheartened. After all, I happen to like omelettes, and who says they can’t be sweet anyway! I roped in my poor unwitting housemate to share in the taste test, coasting off my previously positive culinary reputation. I even attempted to present it well, although this was perhaps asking too much. 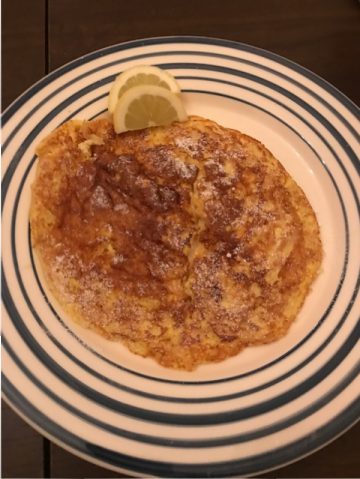 Serve it up with lemon

We both took a forkful and braced ourselves. To do my dish justice I chewed for what felt like an interminable period. I could certainly taste the apples and the lemon. But there was one overwhelming problem. To quote my housemate, “it’s a unique… texture“. Unique was one for it. Rubbery was more accurate. I seemed to have taken the instruction ‘beat them very well’ too far. The shredded apple was held together by spongy eggs that I’d whipped to death. The coagulated mass managed to be both dense and aerated. Chewy, yet crunchy. It was irredeemable. My housemate quickly begged for a reprieve. 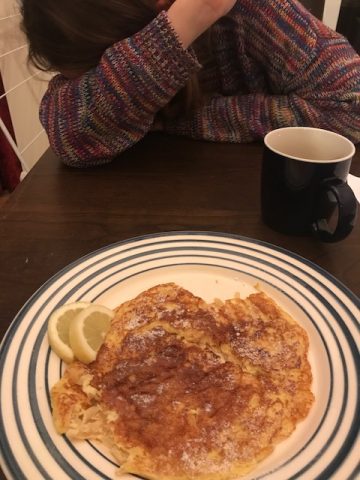 “I don’t think I can eat anymore”

Despite this indisputable fail, I have not totally abandoned my love of experimental cooking. I will not be put off and will try another Georgian recipe sometime in the future. Watch this space. Just maybe not anything with bacon…