Alison Daniell is studying for a PhD at the University of Southampton, researching attitudes to married women’s property ownership in female-authored fiction of the long eighteenth century. Here she talks about her experiences of researching at Chawton House: 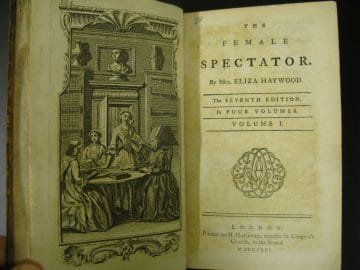 “I am incredibly fortunate to have access to the beautiful Upper Reading Room at Chawton House on a regular basis. As a mature student, returning to education in order to undertake a PhD, being able to spend some of my time working at Chawton has enabled me not only to access resources vital for my project and has also provided me with a stimulating, supportive and inspirational location. For a lifelong Jane Austen enthusiast, being able to work in a house with which she was familiar and which was owned by her family is very special indeed – and I have to confess to a small shiver of excitement every time I walk up the steps to Jane’s ‘Great House’. 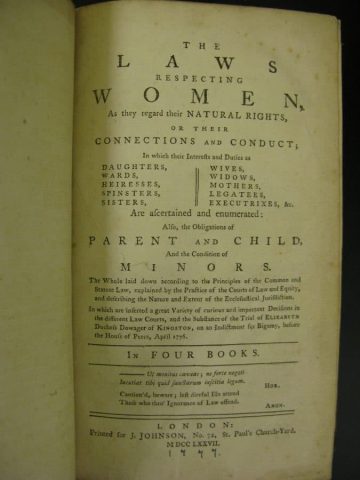 “My research is wide-ranging, both in terms of chronology and subject matter. I am examining the lived experiences of women under the law of coverture in the long eighteenth-century and how those experiences were interpreted by female-authored fiction of the same period. This brings together the varied disciplines of law/legal history, social history, literature and gender studies but the collections at Chawton House are so extensive that I have been able to use them to access primary and secondary materials relevant to all parts of my research. One of my key texts is The Female Spectator, authored by the novelist and playwright Eliza Haywood and, at Chawton House, I have been able to work from an edition dating from 1771. I have also been fortunate to have had access to an original edition of Elizabeth Chudleigh’s The Laws Respecting Women (London: Joseph Johnson, 1777). This learned and detailed digest of the law of England and Wales provides an invaluable insight into how the eighteenth-century legal system was viewed by women – demonstrating not only the double standards which frequently operated within the law but that those discriminated against were keenly aware of the disadvantages under which they lived. When discussing divorce by way of act of Parliament, for example, a remedy available only to husbands, Chudleigh is clear that the current law has no basis in morality or fairness but rather exists to ensure the transmission of patrimony to the legitimate heirs:

‘It is further observed, that a woman cannot obtain the same redress from the legislature against her husband, if she prove him incontinent [an adulterer]. Even in a case of bigamy, a first wife cannot procure an act of parliament to dissolve her marriage. For by such conduct in a husband nothing is committed that tends to bastardize the issue born in wedlock…’ (Chudleigh pp.93-4)

In addition to these valuable primary resources there is also a vast range of secondary commentaries on all aspects of women’s writing and position in society from the early modern period onwards. The librarian and his staff are incredibly helpful and attentive and have been of tremendous support to my project. I am incredibly lucky to have access to these wonderful collections and to be able to do so in such a beautiful and – historically significant – place.”