When young Edward Austen was adopted by Thomas Knight II and his wife Catherine, he inherited more than just the three estates of Godmersham Park, Chawton House, and the Steventon Manor House – he also inherited the Knight family history, a history that included the Brodnax, May, Monke, Martin, Lewkenor, and others.(1) These histories can be ferreted out by studying the surviving bookplates which are found in many of the books that were in Edward (Austen) Knight’s Godmersham and Chawton libraries.

The Reading with Austen website project has been most successful in locating a number of the missing titles from these libraries by searching for these bookplates, all based on the various family coats-of-arms: those of Thomas Knight, Edward Knight, and Edward’s grandson Montagu George Knight. When this provenance is referenced in library catalogues, auction records, or bookseller lists, we look for the title in the 1818 catalogue of the Godmersham Library, and we are quite beside ourselves, knowing that this very book was on the shelves Jane Austen knew and perused!

So what do these bookplates (also called Ex-libris) tell us?

Excluding some of the heraldic detail (heraldry has a language all its own!) and many of the references to color (which are paramount in the heraldic tradition but the bookplates are only black and white), we will look at the three most important to get a sense of how these multiple family histories are entwined into the symbols and patterns that make each bookplate unique to the individual. 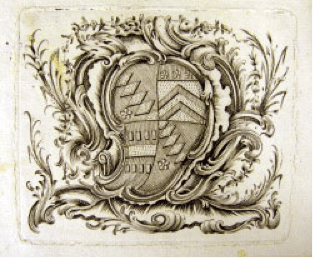 Thomas Knight I (1701-1781) and Thomas Knight II (1735-1794) – both used the same bookplate and it includes the Knight, Brodnax and May arms, all names Thomas I took in order to inherit various properties:

The Knight arms in the 1st and 4th quarters of the shield consists of a green diagonal band of gold lozenges (in a diamond shape: “the lozenge is a symbol of honesty and constancy and it is also a token of noble birth.” (Parker)), and below the band, a white cinquefoil (a 5-petalled flower, representing hope and joy).

The 2nd quarter is the Brodnax arms, a gold shield with two red chevrons (in the shape of a roof rafter, signifying protection) and with three white cinquefoils above. 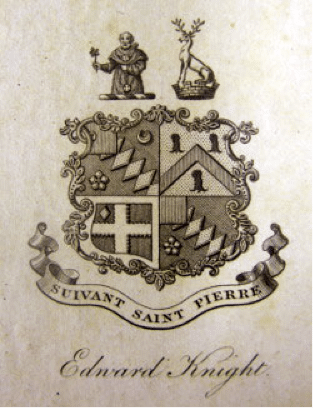 When Edward (Austen) Knight (1767-1852) (Jane Austen’s brother for those confused by all these names) took over the estates of Thomas II in 1812 and officially took the Knight name, he had his own bookplate made – it was engraved by the Wyon family, one of the most prestigious engravers of the time. (Hartley, 334). He combined his Knight, Austen, and Leigh (his mother’s family) heritage into the one design:

In the 1st and 4th quarter her repeats the Knight arms with the addition of a red canton (a square shape) in the top left corner of the shield, this to show he was not directly descended by blood from the Knight family.

The Austen arms comprise the 2nd quarter: though never officially registered, these arms were used by the Rev. George Austen and appear here as a gold shield with a red chevron between three black lion paws.

The Leigh family is represented in the 3rd quarter by a red engrailed (cut edges) cross with a silver lozenge in the top left corner.

Edward also adds two crests from the Knights (the Monk) and the Austens (the Stag). The monk or friar holds a stemmed cinquefoil in his right hand (this was originally a lantern but was changed with the Brodnax connection) with a bracelet of beads (a rosary) and a cross hanging from his left hand, the cross a symbol of faith and the Church. A red rose (a symbol of grace, beauty, and sometimes martyrdom) was also added to the monk’s robe.

The stag was on George Austen’s bookplate and is shown seated upon a coronet (crown).

The motto “Suivant Saint Pierre” (following Saint Peter) is also prominently displayed, this being the Knight motto since 1679.

If one looks at the Knight china that Edward ordered from Wedgwood in September 1813 (see Ltr. 88), the pattern includes both the gold lozenges as a border and the monk crest. 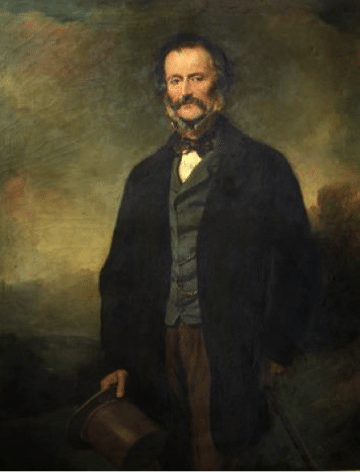 Edward’s son (above), known as Edward Knight, Jr. (1794-1879), used the same bookplate as his father as far as is known – there are some books with this bookplate but with Edward Jr’s signature. But his son (below), Montagu George Knight (MGK) (1844-1914), created his own, playing with all the family arms and added even more to the mix. 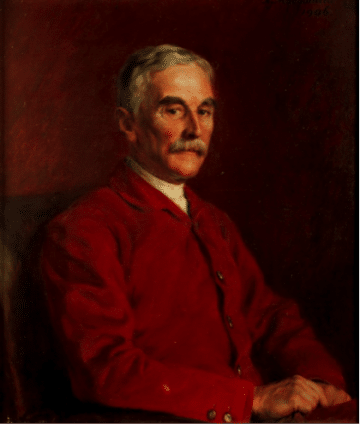 MGK had three bookplates engraved by the very prominent engraver Charles W. Sherborn. The first one seen here was done in 1900 (below left), the second rectangular one in 1901 (below right) – both of these are quite rare. 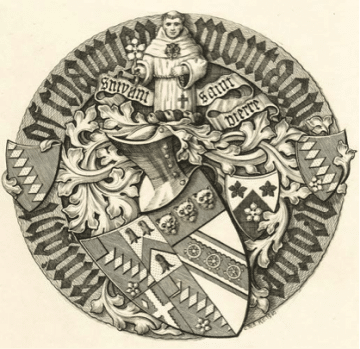 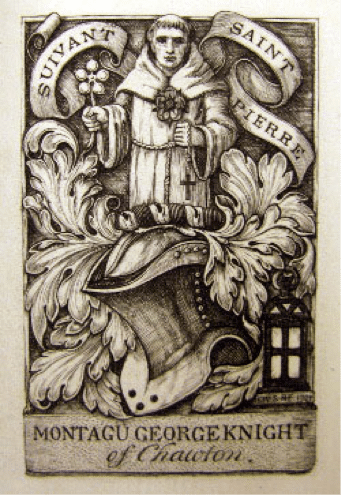 The third armorial circular bookplate (below), in the style of an ancient seal, is the most commonly seen, Montagu putting it in many of those books that remained in the combined library collection once Godmersham was sold in 1874. This plate shows all the heraldic elements of the family heritage with the addition of the arms of the family of his wife Florence Hardy: 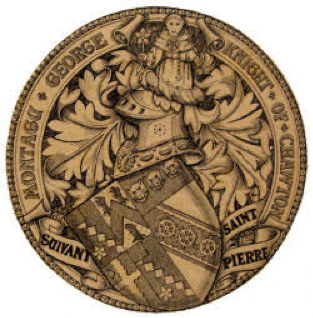 The helmet is in profile with the visor closed, as is appropriate for either an esquire or private gentleman. The shield is slanted and includes on the dexter side (right side of shield, but the left side to the spectator) all the arms from Edward’s bookplate: the two Knights, Brodnax, and May. The sinister side (left side, right to spectator) contains the arms of the Hardy family (Charles Hardy of Chilham Castle): a red shield with three barred leopard heads in silver and a slanting bar covered with three gold Catherine wheels (Catherine refers to St. Catherine, a Christian martyr, and serves as an emblem of one’s willingness to undergo great trials for their Christian faith).

MGK, following his grandfather, uses the monk crest with the rosary and cross, the cinquefoil and the red rose on the robe.

There are a few items undetermined: the three different symbols on the helmet, and the meaning of the leaves. These might just be decorative touches, but if anyone has information please contact me through the website.

Two interesting bits about Jane Austen: the lozenge symbol is said to signify persuasion. And the rose, in “the very ancient rolls, is chiefly borne by branches of the one family of the D’arcys.” (Parker). One can only wonder at this significance .…

(1) This is a very brief summary of the three Knight bookplates that have been found in the books of both the Godmersham Park and Chawton Manor libraries. For a more complete history of the various families, see Chawton Manor and Its Owners: A Family History, by William Austen Leigh and Montagu George Knight, published in 1911, as well as other works in the bibliography, especially those of Edward Hepper who was very gracious in sharing all his heraldic and Knight knowledge with me.

Hepper, Edward. “The Origins of the Knight Coat of Arms and Two Grants of their Arms.” Alton Papers 19 (2015).

Sherborn, Charles Davies. A Sketch of the Life and Work of Charles William Sherborn, Painter-Etcher. London, 1912.