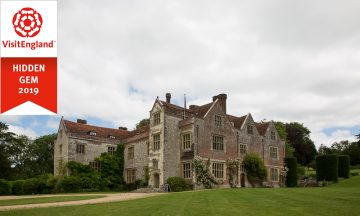 Chawton, Hampshire March 2020. VisitEngland announced that Chawton House has won a ‘Hidden Gem’ award, part of their 2019 Attractions Accolades, which recognises the quality of visitor experiences across England. Following their annual assessment by VisitEngland, Chawton House was nominated for the ‘Hidden Gem’ accolade, based on their exceptionally high score of 85%. This was an increase from 84% given in 2018, with an inaugural score of 71% in 2016.

“England’s attractions provide visitors with amazing experiences and these accolades recognise the outstanding customer service and quality on offer across the country.

“From Best Told Story interpretation to Hidden Gem and overall Gold, these accolades show that there is an attraction capable of capturing everyone’s imagination creating lasting memories and spreading the economic benefits from tourism.”

The recognition is all the more gratifying, given Chawton House has only been part of the VisitEngland Visitor Attraction Quality Scheme assessment since 2016.

Louise Ansdell, Chair of the Chawton House Board, writes: “The award is a testament to the continued hard work and commitment of the staff and volunteers who make Chawton House a special place that people want to visit, and to come back to. From praise for the warm welcome at the house, exhibition, to the shop, to the tearoom, and the grounds – we have a great deal to be proud of.”

2020 marks the sixth year Chawton House has been open to the public, and there are several new highlights to enjoy, such as the newly revamped story of the house’s history and brand new women’s writing galleries. The 2020 exhibition ‘Man Up! Women Who Stepped into a Man’s World’ looks at women in the 18th and 19th centuries who stepped outside of traditional female roles, risking physical perils and public outrage in disguising themselves as men. The Old Kitchen Tearoom continues to go from strength to strength, with an entirely homemade menu of light lunches and delicious cakes which visitors from near and far are coming to enjoy. The gardens are receiving a new lease of life thanks to a newly appointed Gardener and ever increasing volunteer team.