The mystery of Theodore Constantia Harcourt

The mystery of Theodore Constantia Harcourt

Before Chawton House closed for lockdown, Tina Baxter of the Georgian Dining Academy was busy transcribing one of our most exceptional items: an unpublished manuscript written in the style of a Gothic novel. Here, she recounts her progress…

Miss Kitty Pridden and I were invited to visit Chawton House in early October 2019. We had the pleasure of meeting Louisa Carpenter, Deputy House Manager, and Clio O’Sullivan, Communications and Public Engagement Manager after our talk at Hatchlands Park where we presented ‘Georgians Undressed’.

Prior to our visit, Clio very kindly sent us a list of the 18th century Manuscript Collection which she thought might be of interest.  We had tried to be circumspect in our choices but imagine our delight and surprise when we were led into the library to see so many more interesting documents and books, several of which are presented in the Man Up Exhibition!

Children in a sweet shop does not come close to our joy!

We were shown around the whole house, including some of its secrets.  Since our visit, the paintings of the large collection of the clever women who adorned the house are now altogether holding ‘court’ on the second floor. Our visit had been to discuss a collaboration for an evening event to involve Georgian Dining Academy to talk about the portraits, as well as reprise our talk. We would of course, be costumed in our favourite Georgian gowns. Alas it was not to be, due to the pandemic and we give huge Huzzah to Chawton House for putting on such interesting virtual events during Lockdown. Please do view the You Tube Channel for virtual talks and garden walks.

By the time we had returned to London I had realised that I would like to work on The History of Theodora Constantia Harcourt. The book, as far as we know, has never been read or transcribed and my curiosity was aroused. I asked Clio if I might have a go at typing up the 400 pages of this manuscript and it was agreed I would call at Chawton House and set about this task. My first visit was for a few days and I returned intermittently over the months up to Lockdown.

Prior to working on the manuscript, I researched ‘How to decipher unfamiliar handwriting – a short introduction to palaeography’.  A useful document and can be obtained from the Natural History Museum.  However, interestingly it is my long career as a shorthand secretary and typist that stood me in good stead. Having worked from manual to electronic, from handwritten notes in terrible writing in a typing pool, plus working part-time for a Doctor who only scribbled across paper, I was well experienced in deciphering terrible scrawl imitating the written word.

However, Theodora’s penmanship is beautiful. It is the kind of lettering that I worked hard to master in primary school with a scratchy nib and ink over the five lined booklets in ‘Writing Lessons’. So that was one hurdle I had no fear of leaping over. That said, the way one wrote in the 18th century is something else entirely.

No full stops, capital letters or paragraphs. There are also no page numbers. There are dots and dashes everywhere, which could be a dot on an ‘i’ or a cross on a ‘t’, or dashes for emphasis, and so on. You might ask if in a bound book does it matter? It does, as I was to discover!

Here are just some of the drawbacks I encountered. Often when a word will not fit onto a line, it will be split onto two lines – in Theodora’s case without hyphenating the two parts! Also, the letter where it is split is not often recognisable, so you ponder for some time on these two words until you realise it is ‘opi (new line) nion’.

Then we have the long ‘s’ to contend with, which also resembles an ‘f’. There may be a cross stroke on the ‘f’ but is often hardly noticeable. There is an unusual use of capital letters often emphasising an important word, Truth, Love, Honesty, Town, Honour etc.

Spelling was not standardised until the mid-19th century.  However, I found once can usually work it out phonetically.

I photographed the bound book page by page on my tablet. The reason for doing this was to be able to number the pages on the copy! It also enabled to mark up any word I could not transcribe and means I could some of the ‘pages’ home with me. So far, I have managed type up 104 pages. There is no hurry, as it is a work of love. The pages are also typed line by line and page by page as they appear in the original. This will allow for reference points to be added when studied in detail.

So dear Reader you are most probably getting impatient with me now wanting to know what is ‘The History of Theodora Constantia Harcourt’ all about.

The book opens with a preface and a poem, declaring that the writing is personal and created specifically for a ‘friend’. We have no idea who they are or who else may have read this book, which is interesting. Why bind it? Is there more than one copy? Theodora mentions drafts. We do not have the answers to any of these questions as there is no known provenance about how the book came into the Collection.

The first fifty-three pages were completed by 19th November 2019. By then a list of characters had emerged, so let me introduce you to: 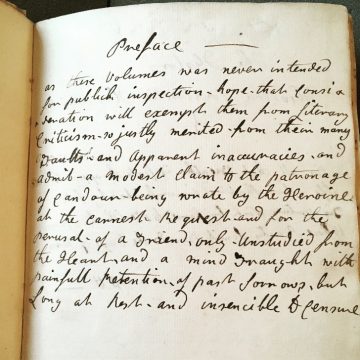 So, after the first forty-seven pages we cover:

By page 104 we have some good fortune, kindness and charity for a few pages but lead on to cruel acts and the heroine must fend for herself once more. What the next 300 plus pages will reveal is anyone’s guess? 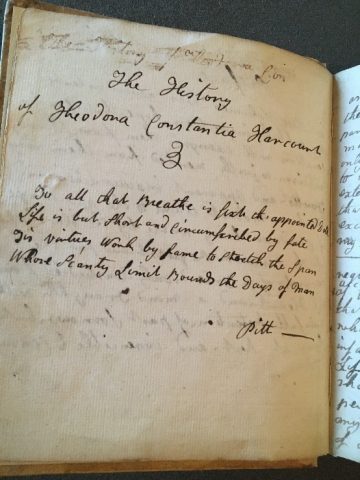 Several times I have had to leave Chawton House on a cliff hanger and I am currently in state of suspense until I can get back to the document! Theodora is once more adrift, as her would-be saviour is cruelly deployed elsewhere.

Theodore’s thoughts and feelings are described in detail throughout her ordeals and brief respites of security and happiness.  As a well-educated young woman of the period, fallen on hard times at the mercy of strangers, her writing opens up so many avenues of exploration into her psyche. If the death which appears in the early pages had not occurred, her life would have taken a completely different path. As and when I work towards the final pages, I do hope certain parties get their come-uppance and Theodore finds happiness before the last line. We long for a happy ending.

The other element open to research from this document, is the writing itself; both the physical aspect of putting down the words and the language used, the spelling, the lack of grammar, the emphasis on certain words. With her penmanship, I can now sense when it is written fast and furiously or other times steady and reflectively. You can almost feel through the pages when she is emotional.  There is evidence however, that there were several drafts and ‘Literary Criticism’ is mentioned in the preface/introduction (see transcript below). So possibly proof that Theodora was well educated but never intended to write a novel.

“… as these volumes was never intended

for publick inspection – hope that consi

deration will exempt them from Literary

Criticism – so justly merited from their many

There will be plenty of options for study once the final page has been typed up and handed over to be included at the resources at Chawton. There is much to discuss including social mores of the period, gentrification of county society, servants, travel, dress and women and their place.  Also, it would be interesting to know what an expert might make of Theodora’s handwriting.

Once completed I trust the manuscript will prove to be of great use for study, as well as an exciting read.

I await the call to return to Chawton House so that I can continue with my extraordinary assignment.