Last chance to visit our Man Up! exhibition

Home>Posts>Library Blog>Last chance to visit our Man Up! exhibition
Previous Next

Last chance to visit our Man Up! exhibition 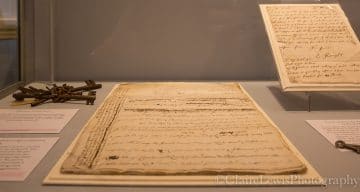 Closing this week, it’s your last chance to catch Man Up!

When Chawton House’s daring exhibition opened in March 2020, it was swiftly forced to close a mere three weeks later following the nationwide Lockdown. We attempted to adapt to the situation, making Man Up! available to explore online, alongside a behind-the-scenes podcast tour.

Man Up! was given a last hurrah, re-opening with the House on May 17 for a limited time only. To celebrate, we’ve created a special Man Up! merchandise bundle for just £8, which includes a Cotton Tote Bag, Pocket Mirror and Fridge Magnet.

“Given how few people actually got to see Man Up! the first time round, I loved getting a second chance to showcase those unique stories of extraordinary women who dared to live beyond societal constraints. Even more exciting was installing new objects specifically for the re-launch. These were weapons on loan from the Hampshire Cultural Trust, including a seven barrel, 34 bore flintlock volley gun. I included these objects as a way to bring to life the perils faced by those female soldiers, sailors and pirates would have fought with weapons such as these: 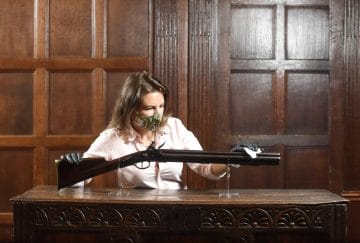 However, my favourite object that forms the collection for Man Up! remains this stunningly evocative piece on loan from the Brontë Parsonage Museum: 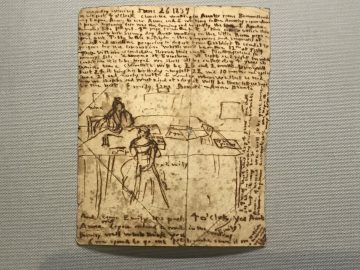 This tiny scrap, taken from Emily Brontë’s diary depicts herself and sister Anne as an ink sketch, seated at the Parsonage’s dining-room table. To me, it beautifully captures the writing community in which the Brontë sisters worked, as well as a moving hope for the future “…all tight and right in which condition it is to be hoped we shall all be on this day 4 years…I wonder where we shall be and how we shall be and what kind of a day it will be then let us hope for the best.” It is a feeling, which has proved particularly poignant this year. Who can say what the future holds – all we can do is hope for the best.”

Last September, Clio spoke to BBC South on the exhibition. You can watch the interview in full here:

Man Up! closes on Sunday 27 June. To book tickets to the House, click here.