Award recognises importance of our unique Library of women’s writing. 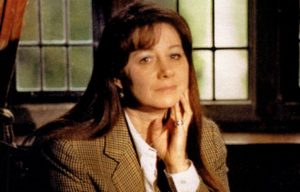 As a foreign national, the award of an OBE by Her Majesty the Queen recognises the significance of Dr Lerner’s cultural contribution to the UK in restoring the house an estate and establishing the Library. Although such awards are usually recognised at the British Embassy in the recipient’s country of residence, when Dr Lerner was first advised of the award over a year ago, she requested permission to delay announcing the honour and wait to be presented with the award at Chawton House Library itself.

Hampshire’s Lord-Lieutenant, Mr Nigel Atkinson Esq, presented the award to Dr Lerner in the Dining Room where Jane Austen would have dined with her brother, Edward. Dr Lerner, like many avid readers, loves the work of Jane Austen. This led her to explore the work of her influences and contemporaries. She discovered lesser-known women writers – many hugely popular in their day – who had been forgotten by mainstream publishing and popular culture. Speaking on this, Dr Lerner has said ‘All of a sudden, Jane Austen made a whole lot more sense. It wasn’t like she’d dropped in from outer space with six of the best novels in the English language and left. You could see her in the context of things she’d read.’ This interest led to Dr Lerner building up a private library of early English women’s literature, 1600 – 1830.

On hearing that the Elizabethan manor house once owned by Jane Austen’s brother, Edward Austen, later Knight, and referred to in her letters as the ‘Great House’, was for sale in a dilapidated condition, Lerner paid £1.25 million to buy it on a long lease from Edward’s descendent, Richard Knight. A further £10 million was spent on its restoration, thereby saving it for Chawton, Hampshire and the nation – as well as for admirers of Jane Austen worldwide.

Chawton House Library has since become established as a world-renowned research and study centre for early English women’s writing. Lerner’s entire collection of around 8,000 books was donated to start the Library, which has grown considerably since then. A remarkably generous gift fired by passion and commitment to widening the literary horizon.

The Library, house and estate is open to the public and runs a varied events programme. This includes international conferences, talks on women writers in the collection and on all aspects of eighteenth-century literature and culture. There is also a visiting fellowship programme, allowing scholars to study and stay on site, which is run in partnership with the University of Southampton.

Richard Ovenden, Bodley’s Librarian at the University of Oxford said, ‘As a Trustee of Chawton House Library, I am thrilled that the Chairman of our board has been awarded this honour in recognition of her tremendous passion and commitment to women’s writing. It is particularly pleasing as the award also reflects the importance of libraries in the intellectual life of the UK’.

Dr Linda Bree, Editorial Director of Arts and Literature at Cambridge University Press and herself a scholar of eighteenth-century women’s writing, said, ‘I’m delighted to see this recognition of Sandy Lerner’s wonderful achievement in founding Chawton House Library, and giving women writers of the past, at last, a home of their own in Britain.’