February’s Woman Writer of the Month

February’s Woman Writer of the Month 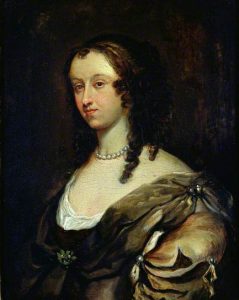 ‘All I ask, is the privilege for my masculine part, the poet in me…if I must not, because of my sex, have this freedom, I lay down my quill and you shall hear no more of me…’

Aphra Behn was England’s first major professional woman writer. She wrote at least nineteen plays, all of them fast paced and theatrical. She also authored a work some believe to be the first English novel, Oroonoko: Or, The Royal Slave. A True Story (1688), a short work of prose fiction whose hero is an enslaved African in Surinam. This extraordinary work highlights the inhumanity of slavery more than 100 years before the movement to end slavery within in the British Empire. Behn also wrote short stories, several volumes of poems and two scientific translations from French.

Much of Behn’s early years are shrouded in mystery. In the 1660s, she made the voyage to Surinam in South America, one of England’s new sugar colonies, possibly with her father, and possibly on her own secret business. It is likely that she was on a secret endeavour, since we find her, a few years later during the Anglo-Dutch War, spying in Antwerp and liaising with a dangerous and double-dealing man she first encountered in Surinam. In between the two journeys, she became Mrs. Behn and probably the widow Behn; about Mr. Behn little is known – he was probably a minor merchant and slaver. Returning to England facing debtors’ prison, Behn instead managed to launch a successful career as a playwright. 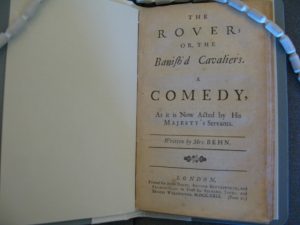 Her association with the louche and raffish world of the theatre allowed Behn to explore sexuality in her writing – something that had always been taboo for women. Her plays included scenes of men and women rising unconcernedly from adulterous beds and her risqué poetry touched on such shocking matter as women’s need for foreplay and the sensitive subject of men’s impotence! Famous – and notorious – in her time, she was a divisive figure known to some as ‘the Ingenious Mrs Behn’ and to others as ‘a lewd harlot’.

It is likely that Behn’s courage to operate outside of gender conventions led to Virginia Woolf’s famous entreaty:

‘All women together ought to let flowers fall upon the tomb of Aphra Behn, for it was she who earned them the right to speak their minds.’
Virginia Woolf (1882-1941), A Room of One’s Own, 1929

As she herself stated, Behn’s words live on today:

‘A Poet is a Painter in his way; he draws to the Life, but in another kind; we draw the Nobler part, the Soul and Mind; the Pictures of the Pen shall outlast those of the Pencil, and even Worlds themselves.’
Oroonoko: Or, The Royal Slave. A True Story (1688)