First launched on Sunday 8th March 2015 in celebration of International Women’s Day, our monthly podcast is a round up of news, events and highlights, helping you stay connected with Chawton House Library wherever you are.

Dr Gillian Dow, Executive Director of Chawton House Library and Curator of our ‘Emma at 200’ exhibition, walks us through the items on display as we celebrate 200 years since the publication of Jane Austen’s Emma. These include extremely rare first editions and manuscript material on loan from institutions around the world.

Jacky Bratton, Emeritus Professor at Royal Holloway, University of London, tells us about Jane Margaret Scott, a contemporary of Jane Austen who she explains has been wrongly forgotten. Jacky is running a one-woman campaign to put ‘the other Jane’ back on the map and gave an impassioned talk here this month about this extraordinary woman, one of a small handful of people who created the West End theatre land that we still enjoy today.

Finally, Matthew Sangster of the University of Birmingham gives us some fascinating insights from his ‘Romantic London’ talk given here in February about the different ways that London was represented during the Romantic Period, particularly around the turn of the century. He explores the way that the city was praised in non-fiction, such as topographical writings, which sought to glorify the growing metropolis, whereas poetry and novels represented it in a negative or confused way, possibly due to its burgeoning size at the time. 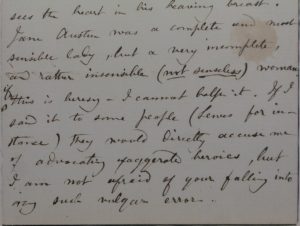 One of the most extraordinary items in the exhibition is Charlotte Brontë’s letter in which she talks at length about Jane Austen’s ‘Emma’, on loan from the Huntington Library, California 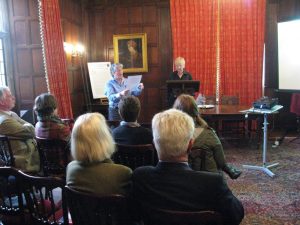 Jane Scott wrote and starred in more than fifty plays. Jacky’s fascinating talk was interspersed by excerpts from some of Scott’s plays read by Professor Gilli Bush-Bailey

This is an illustration from Pierce Egan’s ‘Life in London’ published in 1821, one of many Romantic Period publications about London.