Maureen Corfield, Harriette Boyce and Anne Canning met while studying the MA in Creative Writing at the University of Chichester. They have been coming to Chawton House since last year to seek inspiration from the surroundings. 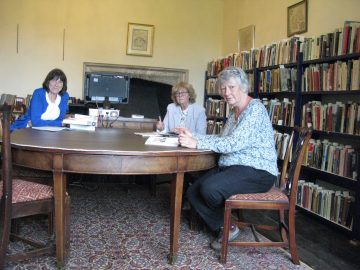 “Were it not for the wisdom of a Jane Austen novel, we group of writerly friends, might be no more than an oblivious group of her characters – writ large in the 21st Century.  But we do know how magnificent Jane and her legacy has been, for women in particular, and literature in general, so that we simply love to do honour to her and her words, her sentences, her chapters and her insights.

“We band of friends love to come together to this marvellous house with its connection to our hero, (because the word ‘heroine’ invites connotations of being no more than hero’s prize).  We come here to write, or think about writing, or talk about writing, or to steep ourselves in surroundings that give us inspiration.  Writing is a lone occupation, easily interrupted, and at home we guard our solitude for the task.  But we know too, that connection, with friends, and with history, is where the inspiration lies.  And so we thank Chawton House for the opportunity it affords us, every once in a while, to make and sustain those vital connections.”