Amelia Opie died on this day (2nd December), 1853. Today, in an act of commemoration, I transcribed the first and the last letters that survived in the Richardson/Beresford archive.

The earliest item, (apart from a few earlier-dated poems, which I imagine were included in a later letter), is a note dated the 20th June, 1825: 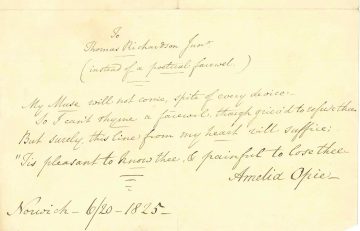 (instead of a poetical farewel[1])

My Muse will not come, spite of every device –

So I can’t rhyme a farewel, though griev’d to refuse thee

But surely, this line from my heart will suffice;

Despite marking a beginning, this also seemed an apt, pithy little rhyme to mark the end of Opie’s life too.

Her first full letter to Richardson is dated 23rd July, 1825, prompted by Joseph John Gurney, who likely introduced them. Opie playfully prefaces her letter as follows: 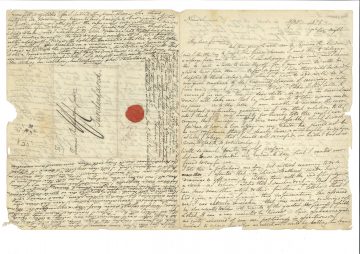 “Art thou going to write soon to Thomas Richardson?” (said I the other day to Joseph John Gurney) because I want thee to deliver a message from me to him –” “I am not going to write soon, (was his reply) and I desire thee to write a letter to him thyself– for I am sure he will be glad to hear from thee –” so far, so good I hope thou wilt be kindly disposed to think, & say; but what I have to add will be a very great drawback to the (presumed) pleasure of receiving a letter from me – Joseph John went on to say – “Take T.R’s letter, & answer it for me” However, dear child! do not be too much cast down; I will take care that he shall write to thee again un de ces jours – as to thy letter, I am unable to answer the most important, & interesting question in it; viz – that relative to <A.C> and I think JJG very naughty for having told thee aught concerning that business – If it were even possible (which is is not) for me to have a love affair on my hands, he should not be in my confidence, though I dearly love, & most highly prize him (at least I believe that I should not so confide in him, but it is wrong to speak so positively.

How I’d love to read Thomas’s letter to JJG! This was shortly before Opie’s application for admission to the Society of Friends (Quakers) was accepted on 11th August, 1825. The earliest mention of Thomas in other letters is in a letter of 30th August to Eliza Alderson, in which Opie writes of a letter from Catherine Carr, thanking her for books by ‘Thos. Richardson of Wearmouth.’[2] I’m hoping the two letters she wrote to Thomas Richardson in August will reveal which books these were. Opie goes on to write of her father’s ill health. He died just months later on 20th October. Her closing lines are on her writing style: ‘When I cross in a letter I do it with red ink. It looks well, & is easy to read.’ This reader begs to differ!

The last letter in the trove was penned on 25th October, 1852, just over a year before she died.[3] It reads as follows:

I have not thy last letter near me, & I cannot, lame as I am, attempt to find the place where it is – but I hope thou wilt be so kind as to receive with complacency, this assurance dear, ever dear friend, that I am in very fair health just now, & my usual pain not much increased –

My physician has ceased his visits –

I have written to thee I think since I left Cromer – Anna Forster & her sister Mary Forster spent yesterday evening with me – & we enjoyed ourselves.

William Forster writes cheerful letters, & is pleasantly arrived in Piedmont – His travelling foreign companion he was then expecting –

Anna [nee Buxton] Forster was the sister of Sarah Buxton, a close friend of Opie’s, and she also knew Elizabeth Fry. She married Quaker preacher, abolitionist, and campaigner for prison reform William Forster in 1816, and they moved to Norwich in 1837. William travelled extensively in North America in 1820–25. Mary Forster was his sister. The Oxford Dictionary of National Biography notes that in later life, she devoted herself to visiting women prisoners, whose plight her brother had earlier decried, following a visit to the women’s section of Newgate.[4]

William Forster is pictured here in Benjamin Robert Haydon’s painting The Anti-Slavery Society Convention, 1840, which also depicts Opie as one of the few women in the crowd.[5]

This day 25 years I lost my dear father! Oimé!

Opie gets the date slightly wrong here, unless she was writing this portion on 20th October, and dated the letter as she finished it five days later. It is also 27 years, rather than 25. She then interjects:

Dost thou know any thing of a Mr Carr, the rector of South Shields?

He married my cousin Tom’s first cousin – they are Evangelical Christian, with a large family, & Tom, when he left me this autumn said he was going to stay at the Carrs – but not one line have I had from him since! – He was also going from ye North, as he said, to Brussels –  He is a strange being! & I wish he would write to me as he ought I think to do – [7]

But she returns back to thoughts of her father, and to a premonition of her solitude which he made on his deathbed, and which troubled her at the time. She wrote of it in the August 1825 letter to Eliza Alderson that I mentioned earlier, and it clearly haunted her over the years, although she found comfort in her faith:

I begin to feel (& humbly pray to be enabled cheerfully to bear it,) the sense of my insulation (if that be the proper term  –  I have no near relation near me to come to me when death is approaching & no one to watch o’er my dying bed – My father said “you will have no one, my child, to do for you what you have done for me.” I was vexed indeed to think that he thought this – Tis true but it is not distressing to me – There is one above I know, who has been “a father to the fatherless” & in whom I implicitly trust – 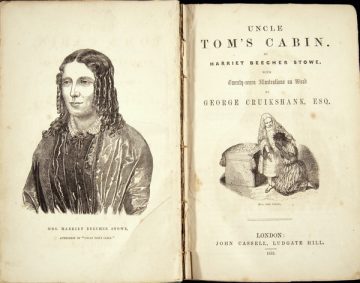 Her final lines provide a commentary on one of the most important novels of the time, Harriet Beecher Stowe’s abolition novel Uncle Tom’s Cabin; or, Life Among the Lowly, which was serialised in June 1851, and published in full the following year.

Farewel! my beloved friend! One word more – Hast thou read Uncle Tom’s Cabin – I am reading it with wonder at its pathos, wit, humour, & the author’s power of drawing characters – And O! what good it must do! Friend Stowe is an admirable & <xxxable> being – I send thee a tract by her that I very much admire –

Farewel! with love to thy belongings, I am

You can view a scan of the entire letter here.

It is fascinating to see how threads of Amelia Opie’s life and character persist over a quarter of a century: her playful humour, her piety, her memories of her father’s death, her deep-seated investment in and facilitation of her Quaker community. Over the course of the next letters, I hope to be able to piece that community together a little more thoroughly, and uncover more of the literature that Opie shared with her friends and correspondents too.

[1][sic]. Throughout the transcription process, original spellings have been retained, and underlining and grammar too, where it is clear.  Uncertain words or phrases are given in <>.

[3]Only three other letters exist from the end of 1852, all addressed to Lady Catherine Boileau (18 August, 4September, 20 November), and now held in the Norwich Record Office.

[4]My thanks to Shelley King for pointing me to the correct transcription of ‘Forster’, and for providing genealogical details.

[5]You can view a labeled version of the painting on Wikipedia here.

[6]So far, I have not managed to trace John and Johnny Church.

[7]This is the same cousin Thomas John Alderson that I mentioned in my last blog post. The Rev. James Carr was Rector of South Shields, Incumbent of St. Hilda’s. His church, in Laygate Lane, was demolished in the 1980s, but Carr laid the foundation stone in May, 1833. In January 1835, there is a record of him being presented with a silver salver with a pocket communion service paid for by 1239 members of the working class of South Shields, to show appreciation for his attention during a cholera outbreak. [The Education Magazine, and Journal of Christian Philanthropy, and of Public Utility, vol. 1] Later, Carr subscribed to the relief fund for the families of 7 drowned fishermen in 1848. He went on to become Canon of Durham and master of Sherburn Hospital, and died in March 1874, survived by his wife Catherine. I imagine that Catherine is the niece of Sarah Boulby, Thomas John Alderson’s mother.