‘Mrs. Opie is often acknowledged handsome, but always allowed to be charming.’ 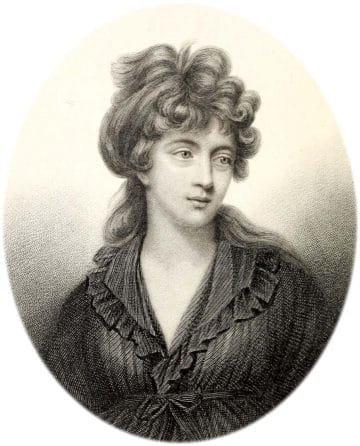 250 years later, 160 of her letters to her Quaker friend Thomas Richardson sit in two boxes on my desk, ready to give up their secrets. Over October, they have been placed in protective sleeves, scanned, and ordered by date, and are now ready to be fully transcribed and catalogued in the coming months.

The process of ordering the letters has given a much clearer idea of the contents of Charles Beresford’s archive. There are 160 items in total, with letters that date from 1824-1852. The majority of the letters are from 1825-1831, when Opie was writing to Thomas Richardson at least once a month. There is a silence from 1831 – 1848, and then a batch of further letters in the final years of Opie’s life – the last, written on 25th October, 1852, just over a year before she died.

To begin cataloguing, I have populated an Excel document with the following information:

During the transcription process, I aim to flesh this document out to include people and places mentioned, as well as a short synopsis, in the same style as found in Clive Jones’ Annotated Register of her letters, with links to the scan and full transcript.[1]

Ordering the letters also suggested some of the difficulties I am going to come up against in working with them as sources. Some will prove extremely challenging to read – a fact that Opie no doubt understood when she wrote in a postscript to an 1826 letter, ‘This blotted paper was the best I could find – and the pen is so bad I can hardly write’. Opie’s habit of crossing – sometimes in red ink over black, but sometimes in the same ink – produces effects that Bridget Riley would be proud of.[2] Moreover, some of the paper Opie used is of very low quality – its thinness has led the ink to bleed through the page, so that the text on the opposite side is visible when reading. Time has added to the general illegibility of many of these letters too. The most tricky will of course be released to the general public in the hope that their eyes are keener than my own. Indeed, the first blog post produced some eagle-eyed helpers from the internet, whose decoding abilities have already proved invaluable.

Further problems arise in that several of the letters are undated, separate sheets have become detached, leaving some letters frustratingly incomplete, and a few have been cut up too, leaving fragments only. However, my hope is that in transcribing, the content will enable me to date some of the undated letters, and to match up sheets that have been separated. Comparisons with contemporary letters in other archives will help flesh out the picture even further, whilst also giving a holistic sense of the Amelia Opie of the late 1820s, newly welcomed into the Society of Friends following her father’s death in 1825, and the Amelia Opie writing to a young friend whilst in the last years of her life.

October provided some tantalizing snippets from the letters: accounts of political unrest in France, playful verse riddles exchanged between Opie and Richardson – the only example of Richardson’s handwriting in the collection is in the form of a poetical reply to Opie – and examples of the changing styles of letter writing, as broad sheets of paper, crossed and folded and sealed with wax, give way to diminutive blue sheets, now missing envelopes. The several manuscript poems with eager requests for feedback are also exciting too, and I look forward to cross-referencing them with what Opie published.

Amongst these, Opie wrote several birthday poems to Thomas. Indeed, it seems that she did this for a few of her friends; she enclosed one example to her friend Elizabeth Lemaistre in 1829, and there is evidence in other archives of annual birthday poems written to Elizabeth.

One other birthday poem arrested me though, on a particularly cold Autumn afternoon at Chawton, sparking a little detective work. On an undated scrap was written the following: 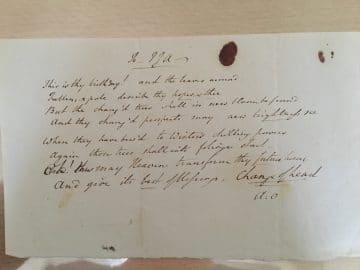 This is thy birthday! and the leaves around,

But the chang’d trees shall in new bloom be found

And thy chang’d prospects may new brightness see

When they have bow’d to Winter’s chilling powers

Again those trees shall into foliage start –

And give its best of blessings, change of heart

What an appropriate poem to read in the failing November light; what better poem to mark Opie’s own November birthday, than this? The hopeful references to a potential rebirth serve, perhaps, as a metaphor for the resurfacing of these letters, wintered in a box and now springing to life again. But also, what a strangely melancholy birthday poem…

So who was TJA? I had a guess that this might be Opie’s first cousin Thomas John Alderson (1791-1864) – I had seen his name a few times in the Clive Jones register, and the more I read, the more he seemed a likely candidate.[3] Why might his hopes be ‘fallen and pale’? A little digging threw up reference to financial issues. It seems that Thomas’s brother-in-law Lenor de Barbot had borrowed heavily from him, and run up some debts. Letters to Thomas’s sister Sarah show Amelia Opie trying to support them in their financial troubles, offering to sell her books and prints to help. However, Thomas went bankrupt on 27th June 1828. It is likely then that the poem was sent to Thomas on his 37th birthday on 28th November, 1828. Opie would have just turned 59, and was looking to comfort her younger cousin, promising that Spring will soon come. He went bankrupt again ten years later. I wonder if Jane Austen had similar words of comfort for her brother Henry, whose banking business had met with the same fate in 1816.

In the Winter of Opie’s own life, she continued writing birthday poems to Thomas Richardson, and although she talks of the ‘minstrel’s fire […] chill’d alas! By age’s frost’, and complains that ‘languidly I strike my lyre’, something tells me that her letters from the late 1840s will still hold the same easy charm as her earlier efforts. As in her poem to Thomas Anderson, a spirit of optimism prevails in her lines to Thomas Richardson, which warmed me as I’m sure they warmed the Thomases too:

And, if in Friendship’s strange despite,

I ne’er again, thy face may view,

No more in converse grave, or bright

Oh! may we meet on that eternal shore,

Where souls by virtue join’d, shall part no more! 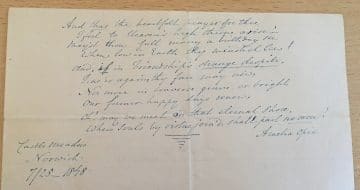 [2] In a previous blog, I speculated that the reason for the crossing was possibly to do with a lack of paper, although Charles Beresford has recently suggested that postage costs might also account for it. The fact that the worst culprits are those written from France would seem to support this suggestion.