This week we celebrate the anniversary of VE day, and this blog relives some wartime memories from Chawton House. 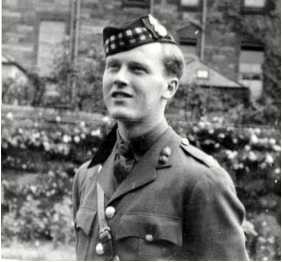 At the outbreak of the war, Edward Knight III owned the house.  He was posted to France and then India, leaving his young pregnant wife, Peggy, to run the house and estate.   Many of the men in the extended Knight family were called up. Edward’s cousin, Peter Knight, who had lived at Chawton House in the early 1930s, was killed defending the perimeter at Dunkirk. Another cousin, ‘Bill’ Bradford, was captured at the same time but succeeded in a daring escape including sailing 400 miles to Gibraltar.

The picture below, taken in 1942 on the Lutyens terrace of Chawton House, shows Peggy (on the left) in 1942. Her son, the present owner, Richard, is sitting on her knee. Next to her is Peter’s sister, Jeanne.  Her husband, who took this photo, was a naval officer on leave from serving on the artic convoys to Russia. On the right is Betty Rose, married to a serving army officer. She later became the curator of the Jane Austen museum. 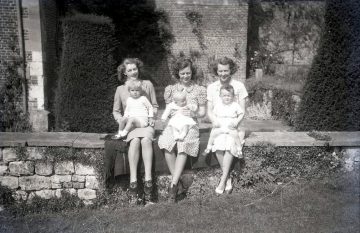 Chawton House itself was undamaged by the war although a German bomber crashed on Chawton estate having collided with an RAF Hurricane.  Amazingly, we have a photo of the German crew.  Two survived – one was captured by the gamekeeper and marched up to Chawton House, and the other was captured by a retired army officer with his old service revolver, which got him into trouble with the police because he shouldn’t still have had it.   The bodies of the other crew buried at Chawton church and repatriated after the war. 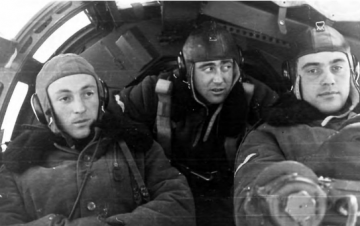 Germen aircrew from the crashed Heinkel 111

More happily, Peggy had decided to make the house available to girls from Dr Barnardo homes in London.  37 arrived in 1942, and they loved being here – they played croquet and tennis, and swam, and ate strawberries, and played in the gardens, enjoying the walled garden and of course ghost stories.  The younger ones went to the local school, and one girl, Eunice Miller, went on to win a silver medal for diving at 1954 Commonwealth games. 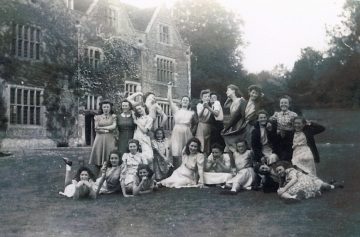 After VE day, some German prisoners were held in sheds on the grounds.  The girls remember saving up boiled sweets for ‘a lovely kind man’ called Dieter, who made them toys.  One Barnardo girl, Margaret Meldrum, returning years later, wrote a moving poem of her memories and how the house had taken them in.  It concluded:

For this house, it said, ‘I understand’

The house, it wrapped its love around us

And it never let us go. 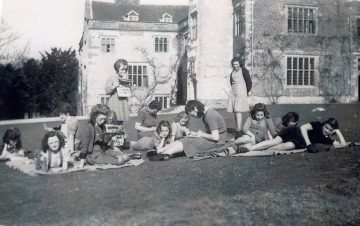 The house also took in one of the Knight family from New Zealand, Alister Austen Deans – a descendant of Edward Austen Knight.  He had been wounded and captured in Crete by the Germans and liberated after VE day. He recuperated at Chawton House, looked after by Peggy, before returning to his home where he became a noted landscape artist.  This final picture is by him of Chawton House in the autumn of 1945. 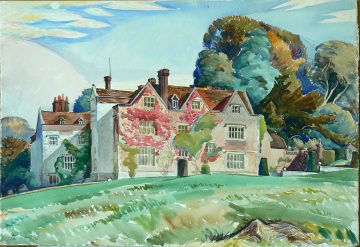