Izzie Warwick (15) was on work experience at Chawton House in June 2022. Alongside working across different areas of the house, she undertook an independent research project to write about one of the objects she came across at Chawton House. The following blogpost is the result of her time here.

Izzie is going into her final year at school, taking History, Classics and Art. She would like to go to university to study Philosophy. In her spare time, she enjoys writing and drawing. 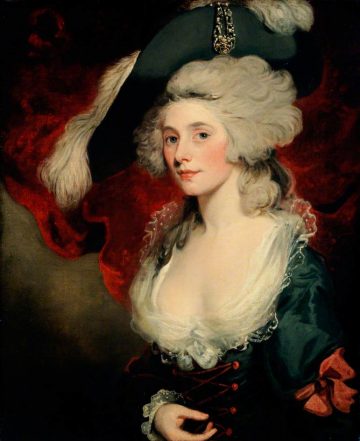 An Actress. A Mistress. A Beauty.

Once a famous and fashionable performer, brought near to ruin by the passions and the empty promises of a prince. The scandalous life of Mary Robinson begins long before the affair and extends far past it in fragments long brushed aside by history. Fragments that are only in recent years being brought into the light.

The portrait of her that hangs gracefully on the wall here in Chawton House, draws the eyes of many a spectator, myself included. Her beauty is what caught my attention as it once did the young Prince of Wales, causing him to offer her money in return for her affections. A most infamous ordeal, but her story begins much earlier.

Born into a broken family, Mary Darby’s passion for poetry began young. Her father, a naval officer, left early in her life for a mistress, while her mother, forced to support herself and her five young children alone, started a school for young girls at which Mary taught while only a teenager. Sadly that was short-lived as her father had the school closed down.

At fourteen she felt obliged to marry a supposedly wealthy man named Thomas Robinson, out of mixture of parental pressure and gratefulness. After wedding him and bearing his child, she realised his claims of inheritance were lies and he was, in reality, a gambler who shamelessly had many affairs during their marriage. Eventually his elaborate lifestyle caught up with him and his family joined him in a debtor’s jail in 1775. Mary’s only form of income, and the family’s only support, was the poetry she’d begun to write. It not only offered her money but also a temporary liberation from her newly grim existence. Her first published book bore the title Poems by Mrs Robinson (1775) and contributed to their release from prison.

All I ask of bounteous heav’n,
Is to live a peaceful life,
In a cottage, sweet retirement,
Far from giddy noise and strife.

Far from town, and all its vices,
Dissipation, care, and fear,
Passing all my days serenely,
Ending life, without a tear.

Far from ball, and masquerade
Far from op-ra, park, or play,
Far from courtly pomp, and fashion,
Innocently blith and gay.

Finally Thomas was offered a job copying legal documents as a chance to pay off his debts. In his arrogance, he refused. So Mary took it instead, eventually securing their release from prison. She continued to write poetry during this time and dedicated her second publication, a long poem titled Captivity (1777) to Georgiana Cavendish, Duchess of Devonshire, who had partly funded her first volume. 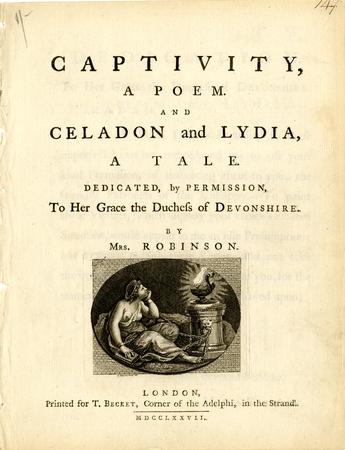 Both Mary Robinsoon and the Duchess of Devonshire suffered the loss of their reputations because of their extra-marital affairs.

Once her husband was released, Mary became an actress. Her acting earned her extensive praise and her role as Perdita in Shakespeare’s A Winter’s Tale became associated with her name for centuries to come. She was painted in the role by John Hoppner, an artist famed for portraits of the aristocracy. Wrapped up in her newfound fame, Mary became the portrait of style for young ladies. Everyone desired the clothes she wore, the makeup she used and the body she lived in.

One fateful night at a performance of her Perdita, the young Prince of Wales was seated in the audience and, like many before him and many after him, was completely bewitched by her beauty and grace. He offered her twenty thousand pounds to be his mistress. Mary struggled immensely with living in the public eye and did not want to be known as a mistress. But she eventually left Thomas for the false illusion that the Prince would treat her better than her husband. But he ended the affair after a year, refusing to pay her what he’d promised and shattering her reputation. Mary could no longer find work as an actress and had to support herself through only her writing. Finally the monarchy agreed to pay her in return for the Prince’s letters to her, and later she managed to negotiate a five hundred pound annuity from them, although it was rarely paid.

Mary went on to live separately from her husband and have various affairs, most prominently with a soldier named Banastre Tarleton. The affair was renowned for its odd beginning. She has previously been seeing a friend of his who, in his certainty of her loyalty to him, bet a thousand guineas that none of his friends could seduce her. Unfortunately for him, Tartleton had accepted this bet and proceeded to have a fifteen-year relationship with Mary before marrying another woman.

One night, Tarleton did not show up at the opera where he had arranged to meet Mary, now pregnant with his child. He could not be found and rumour had it that he was on route to Dover. Mary, worried about him, travelled in pursuit. During the course of this journey she suffered an unidentified ailment that left her paralysed below the waist for the remainder of her short life. While there is no definite explanation of what caused this, there have been speculations. Paula Byrne, in her biography on Mary’s life, theorizes that she suffered a miscarriage during the journey. This led to infection and, mixed with the harsh weather, caused severe rheumatic fever. This seems the most plausible explanation as, while Mary began the journey pregnant, she never had the child or any others after.

Now that she was partially paralysed and an outcast from society, Robinson devoted her time to writing. She published many poems in newspapers, most notably The Morning Post, under pseudonyms such as “Tabitha Bramble” “Laura” and “Oberon”. Her poetry was so popular, as her beauty and grace translated into her writing, and in the late 1780s she was finally able to rid herself of the cursed name “Perdita” and take on a new role as “the English Sappho”. She was admired by and influenced many other poets. 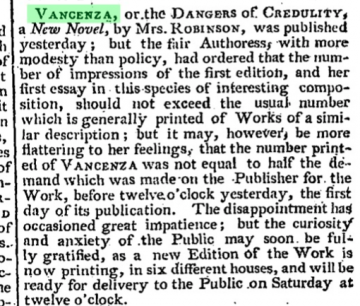 In 1792, Mary published her first and most successful novel, Vancenza; or The Dangers of Credulity. The gothic story, published in two volumes, became one of the best selling books of the late eighteenth century. An announcement in The Oracle (left) in 1792 states that “the number printed of Vancenza was not equal to half the demand which was on the Publisher for the Work, before twelve o’clock yesterday, the first day of its publication” – it sold out immediately. The tale promotes her own moral and political beliefs about the need to improve women’s education. The second of her books was titled The Widow; or, A Picture of Modern Times (1794). It discussed social themes such as manners and respectability. And another of her novels, Walsingham: Or, The Pupil of Nature (1797) provided a commentary on society’s restraints upon women. She wrote seven novels in seven years. Robinson gained many wealthy and famous subscribers, including royalty and nobility. 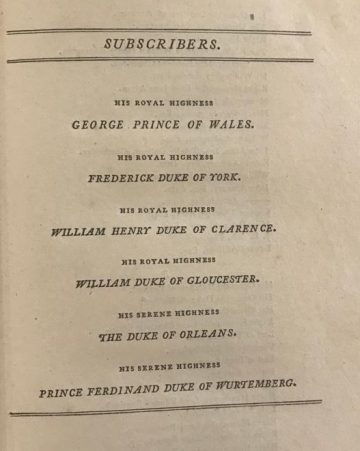 The first page of subscribers to Walsingham gives a sense of the circles Mary Robinson moved in.

Mary also tried her hand at playwriting. She wrote two plays in 1778 while she was still acting, but then nothing until the 1790s. One attempt was a comedy titled Nobody (performed on 27 November 1794 at the Theatre Royal, Drury Lane) about upper-class women involved in gambling. The play was disastrously unsuccessful and the themes it covered were quite appalling to the audience. Robinson tried again, this time with a tragedy, The Sicilian Lover (1796). No theatre wished to buy it and only thirty-two printed copies were sold. Due to her scandalous name, very few actors wished to be associated with her.

Despite working in multiple genres, a thread ran through Robinson’s work. She was an avid feminist and wished to promote women’s position in the literary industry along with their sexual rights. In her Letter to the Women of England, on the Injustice of Mental Subordination (1799), she wrote: “Shake off the trifling, glittering shackles, which debase you … Let your daughters be liberally, classically, philosophically and usefully educated.”

She was also a strong supporter of the French Revolution and even wrote a poem about it: Ainsi Va le Monde (1790):

“Who shall the nat’ral Right of Man deride,
When Freedom spreads her fost’ring banners wide?

Or prodigal of joy, his birth-right give
In shackled slavery – a wretch to live?

At the premature age of forty-four, Mary died in poverty in Surrey. The doctors stated her death was caused by “dropsy in the chest”. Her final desire was for her daughter to publish the remainder of her work. For years, Robinson never received the recognition she deserved, as in the public’s eye she would only ever be Perdita, a Prince’s mistress. Her tragic life became a warning tale to young women about the dangers of desire. 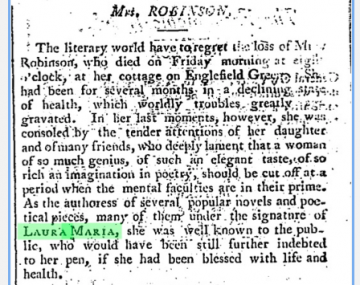 Mary Robinson’s Death Notice in the ‘Morning Post’ December 1800. Highlighted is one of the many pseudonyms under which she was published.

Luckily, in more recent years her impact on feminism and literature is being uncovered and she is finally getting the recognition she deserves in both academic and public circles. Her beautiful portrait at Chawton House is the starting point for conversations. For she was not just Perdita, nor was she simply a mistress.

A Novelist. A Poet. A Feminist.