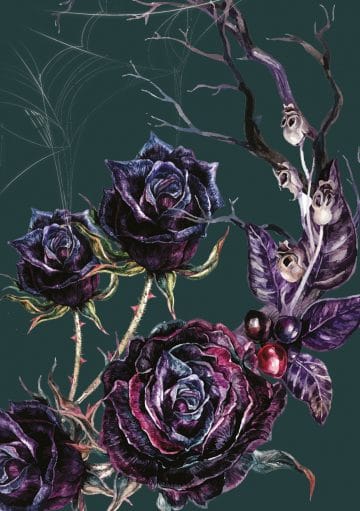 Inspired by the eighteenth-century botanist Tournefort, who voyaged in search of plants and found instead a plague of vampires on the island of Mykonos (1702), Sam George’s botanical studies have taken a gothic turn. Following the publication of Botany, Sexuality and Women’s Writing (2007), and her contribution to New York Botanical Garden’s Poetic Botany she became the convenor of the Open Graves, Open Minds project. She now researches botany alongside the gothic, unearthing depictions of the vampire and the undead in literature, art, and other media, embracing werewolves (and representations of wolves and wild children), fairies, and other supernatural beings and their worlds. In this talk she presents a snapshot of the material that led to her research project coining the term ‘botanical gothic’. She explores a new darker, shadowy world of plants, found at the intersection between folklore and the gothic. As Halloween approaches, she demonstrates how our knowledge of plants is magically transformed when viewed through this lens of dark folklore. Did you know for example, that the seed heads of Snapdragons resemble tiny skulls, that Bluebells are a dangerous and potent fairy flower (the Scottish name for the plant is ‘Dead Men’s Bells’); that Hawthorne is the favoured wood for staking vampires? A surprisingly dark history of plants will be uncovered via this special Halloween journey into the botanical gothic.

Sam George is Associate Professor in Research and the Convenor of the popular Open Graves, Open Minds Project at the University of Hertfordshire. She is a writer of feature articles on literature and folklore in the national and international press. Her interviews have appeared in newspapers from The Guardian to The Independent and the Wall Street Journal. Her research interests span from women and botany to vampire studies, werewolves, dark fairies, and the gothic. She is the author of Botany, Sexuality and Women’s Writing (2007); In the Kingdom of Shadows; Optics, Dark Folklore and the Gothic in the Literature of the Long Nineteenth Century (forthcoming 2022), and the co- editor of Women and Botany (2011); Representations of Vampires and the Undead from the Enlightenment to the Present Day (2012); In the Company of Wolves: Werewolves, Wolves and Wild Children (2020). She co-edited the first issue of Gothic Studies on ‘Vampires’ with Bill Hughes in 2013 and ‘werewolves and wildness’ followed in 2019. She is currently working on an edited collection on The Legacy of John William Polidori: The Romantic Vampire and its Progeny and researching a book on fairies and the gothic for Bloomsbury. You can follow her on Twitter at @DrSamGeorge1

This is an online event. Ticket holders will be emailed links on the day of the event. The interview, pre-recorded to ensure quality, will premier on YouTube at 7pm but will be available to watch for those with the link afterwards. Please note the Zoom Q&A is live and will not be recorded.