Gift inscriptions and signatures in books that once belonged to Jane Austen’s nieces.

Home>Library Blog>Gift inscriptions and signatures in books that once belonged to Jane Austen’s nieces.
Previous Next

Gift inscriptions and signatures in books that once belonged to Jane Austen’s nieces. 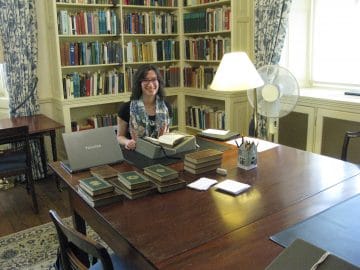 In August this year, with the generous support of the British Association for Romantic Studies’ inaugural Chawton House Travel Bursary, I spent two weeks in the beautiful Upper Readings Room at Chawton House. I came to Chawton House to examine gift inscriptions and signatures in books that once belonged to Jane Austen’s nieces. What I found in the archives was a haven for annotation and manuscript additions to texts. My PhD thesis examines the ways in which eighteenth- and nineteenth-century women use of letter-writing, annotation and commonplacing (the collection of poetry and prose in journals circulated among friends) to create spaces of intimacy in which to foster and maintain their friendships. In the plethora of annotations and gift inscriptions in this archive, I found evidence not only of a nineteenth-century community of women readers but also of an ongoing network of scholars and Austen enthusiasts continuing these practices into the twenty-first century.

I spent much of my time with the Knight collection, the extant family library of the Knights, the descendants of Jane Austen’s brother Edward Austen Knight, currently on loan to Chawton House. I was particularly interested in the signatures of Marianne Knight, Jane Austen’s niece, and the books gifted to her by her Aunt and sister, both named Louisa. Marianne’s small collection of books which includes poems by Walter Scott, novels by Maria Edgeworth and a gardening book can be seen as a kind of sub-collection within the larger Knight family library. This impression is emphasised by the uniformity and clarity of her signature and handwriting. As I continued my exploration of this collection I found other such small collections of signed books owned by Knight family members which similarly recorded their relationships and demarcated a personal textual space within a large, historic library. The Knight collection includes not only Marianne’s books, but also family bibles used to chronicle the births and deaths of Knight families and an early nineteenth-century Baronetage heavily annotated to include marriages and resulting children in the entries for families residing near the Knight’s estate in Kent. This is the very copy believed to have inspired the opening to Austen’s Persuasion. In addition to these annotated texts, a few twentieth-century inscriptions to and by Anne Knight which appear in at least five texts, create an interesting counterpoint to Marianne’s collection. One of Anne’s books, a bible like those used to trace the lineages of her ancestors, is inscribed “To Anne from Hylda Bannister with many happy memories of Hall Dene School, Alton.”1 Like Marianne’s books from her female relatives, this bible memorialises a particular, personal friendship between women within a much larger, centuries-old family library. Such an inscription connects this twentieth-century Knight with her nineteenth-century relatives and continues a tradition of annotations as intimate records of relationships. 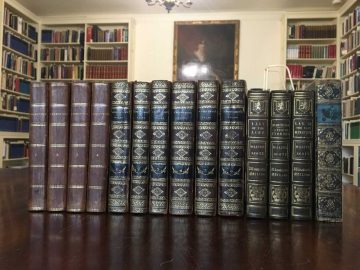 Books inscribed by Marianne Knight extant in the Knight Collection.

Image courtesy of the Knight Family Collection on deposit at Chawton House. 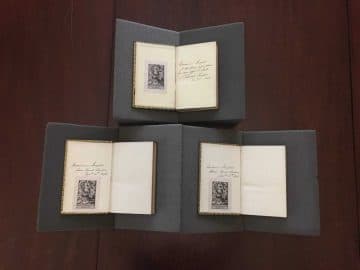 Marianne Knight’s gift inscriptions in her volumes of Scott gifted by her aunt and sister.

Image courtesy of the Knight Family Collection on deposit at Chawton House.

This tradition is continued today in the gift inscriptions in Chawton House’s general research collection. Many scholars who have enjoyed, as I have, the productive and welcoming atmosphere of this historic house and it’s dedicated, generous team of staff and volunteers have donated the resulting published works to the Chawton House library and inscribed the gifted text with their gratitude. When faced with these contemporary inscriptions it’s hard not to feel that Marianne and Anne’s collections of books represent poignant moments in a history of textual acts of commemoration and community which are continued in the manuscript voices of visitors and contributors to this fascinating archive. 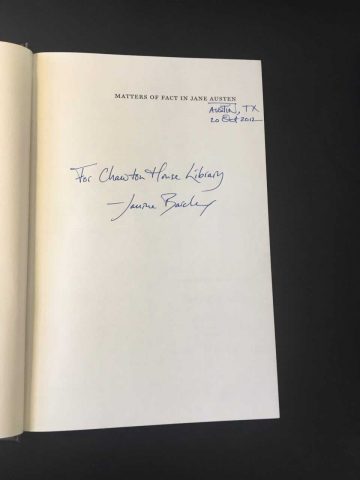 Janine Barchas’ inscription in a donated copy of her work.