Home>Posts>Chawton House News>Gothic Programme at Chawton House: When nature strikes back
Previous Next

When the cold blood shoots through every vein;

When every pore upon my shrunken skin

A knotted knoll becomes, and to mine ears

Strange inward sounds awake, and to mine eyes

Rush stranger tears, there is a joy in fear’

From Frankenstein’s monster to The Day of the Triffids; Ann Radcliffe’s wildly sublime literary landscapes to the environmental apocalypse of films such as The Day After Tomorrow; from eighteenth-century Gothic to its modern sci-fi descendants, we have always been preoccupied with the effects of the natural world on humankind – when nature strikes back. As Autumn draws in, join us for dark folklore, plants and plagues: Gothic tours and talks, a new garden trail, atmospheric dining, and a movie night that’ll put a spell on you. 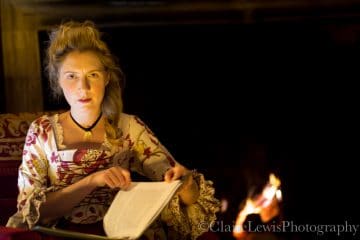 Two brand new displays in the house will share the terrors of our collections. Gothic Landscapes in the Long Gallery explores the icy wastes and craggy mountains, the deep forests and desolate seas that provided the backdrop for Gothic literature. In the Library, we share some of the darkest visions of the collections in Gothic Apocalypse.

All kids wearing their Halloween costume get to visit for free! Bring little ones dressed as green witches and warlocks to fly around Chawton House’s autumnal gardens this October half-term. Explore the grounds and look out for ghostly figures, a witch who met a nasty end, the Grim Reaper’s Hut and a visit to the old pet cemetery…

6-7.30pm. Take a drink with the ghosts in the Great Hall before exploring Chawton House after dark on one of our guided tours. Learn about both infamous and lesser-known women writers who terrorised a reading public and brought the Gothic to life in the eighteenth and nineteenth centuries.

6-7.30pm. Stroll through the moonlit grounds on a guided garden tour. Discover the creatures that only emerge at night as we unearth Chawton House’s eerie family history.

In this online talk, Sam George explores a new darker, shadowy world of plants, found at the intersection between folklore and the gothic. As Halloween approaches, she demonstrates how our knowledge of plants is magically transformed when viewed through this lens of dark folklore. Did you know for example, that the seed heads of Snapdragons resemble tiny skulls, that Bluebells are a dangerous and potent fairy flower (the Scottish name for the plant is ‘Dead Men’s Bells’); that Hawthorne is the favoured wood for staking vampires? A surprisingly dark history of plants will be uncovered via this special Halloween journeys into the botanical gothic.

Sam George is Associate Professor in Research and the Convenor of the popular Open Graves, Open Minds Project at the University of Hertfordshire. You can follow her on Twitter at @DrSamGeorge1

This pre-recorded online lecture will be followed by a live Q&A on Zoom.

7-8.30pm. Join us on Zoom for short presentations and a discussion of ideas of contagion in the eighteenth and nineteenth century:

Michael Brown (University of Roehampton), ‘Foul air and filthy streets: the decline of contagion and the rise of environmentalism in British epidemiology, 1780-1848’

Nick Groom (University of Macau), ‘The Vampire and the Virosphere: Seeing the Invisible’

6-8pm; 7.30-9.30pm. Soak up the atmosphere of Chawton House after dark with an exclusive evening of private dining: a Gothic supper followed by ghostly tales by the fire.

Hocus Pocus in the Barn

6-8pm; 9-11pm.On the scariest night of the year rediscover the classic Halloween movie ‘Hocus Pocus’ in the spooky setting of Dyers Barn.

We hope that you enjoy the frights and delights of Gothic Season at Chawton House!