We are delighted to announce the acquisition of Manon L’Escaut: or, The Fatal Attachment. A French Story (London: Printed for T. Cadell in the Strand, 1786) for our historic books and manuscript collection. 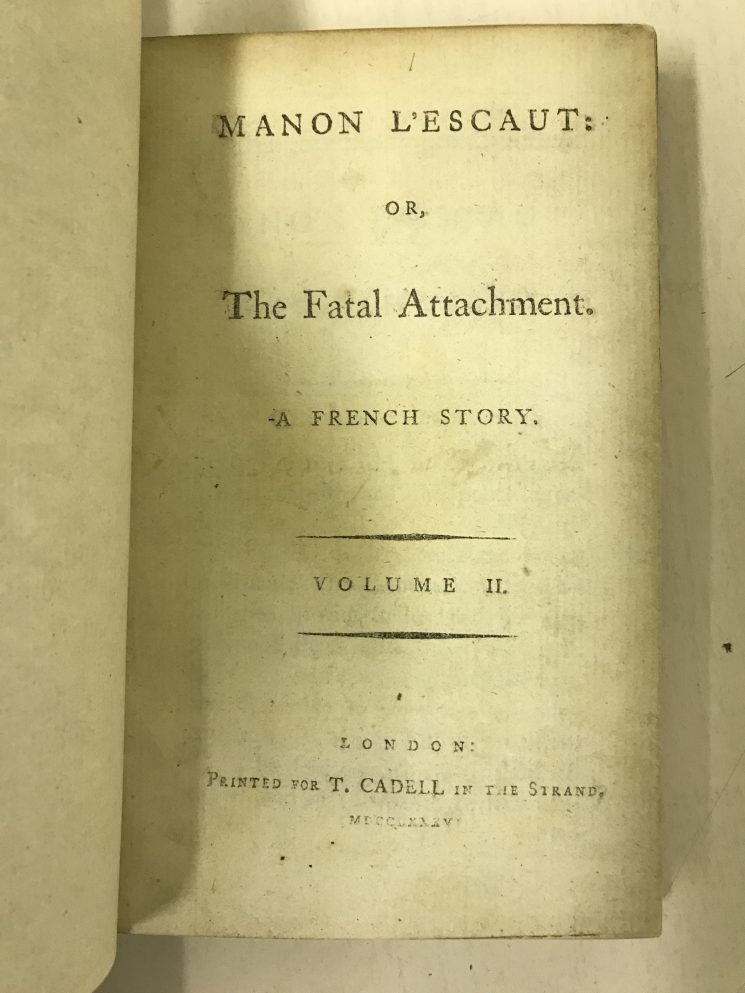 This first – and only – edition of Charlotte Smith’s debut novel is exceptionally rare, with only two other copies listed in private collections in the UK. Following the success of her Elegiac Sonnets in 1784, Smith began her successful career as a novelist with Manon L’Escaut appearing at the end of the 1785 (the title-page listing the following year, as was customary).

Ostensibly a translation of Abbé Prévost’s 1731 novel of the same name, it was conceived by Smith for ‘some English friends who did not read the French’, leading her to ‘translate the whole; or’ – as she pointedly notes – ‘rather to write it anew in English.’1 Her wording is important for she substantially adapts the original story, changing the characterisations of the criminal Manon, and the hero, the Chevalier des Grieux, in an act of creative translation that rewards further study.2  It is by far her rarest work, likely due to charges of plagiarism levied by critic George Steevens, which had a terrible impact on sales. Smith declared that she would rather ‘withdraw the book than let Cadell [the publisher] suffer.’3

Smith is one of the most important woman writers of the Romantic period, who made substantial contributions to poetry and to the Gothic. Manon L’Escaut is important work within Smith’s oeuvre, as the transition between her poetry and novel writing.

With this acquisition, Chawton House’s collection contains the complete set of Charlotte Smith’s novels in their first editions. We are grateful for the support of GLOSS (The Godmersham Lost Sheep Society) and individual donors to aid this purchase.

[1] ‘Translator’s Preface’ to the above work.